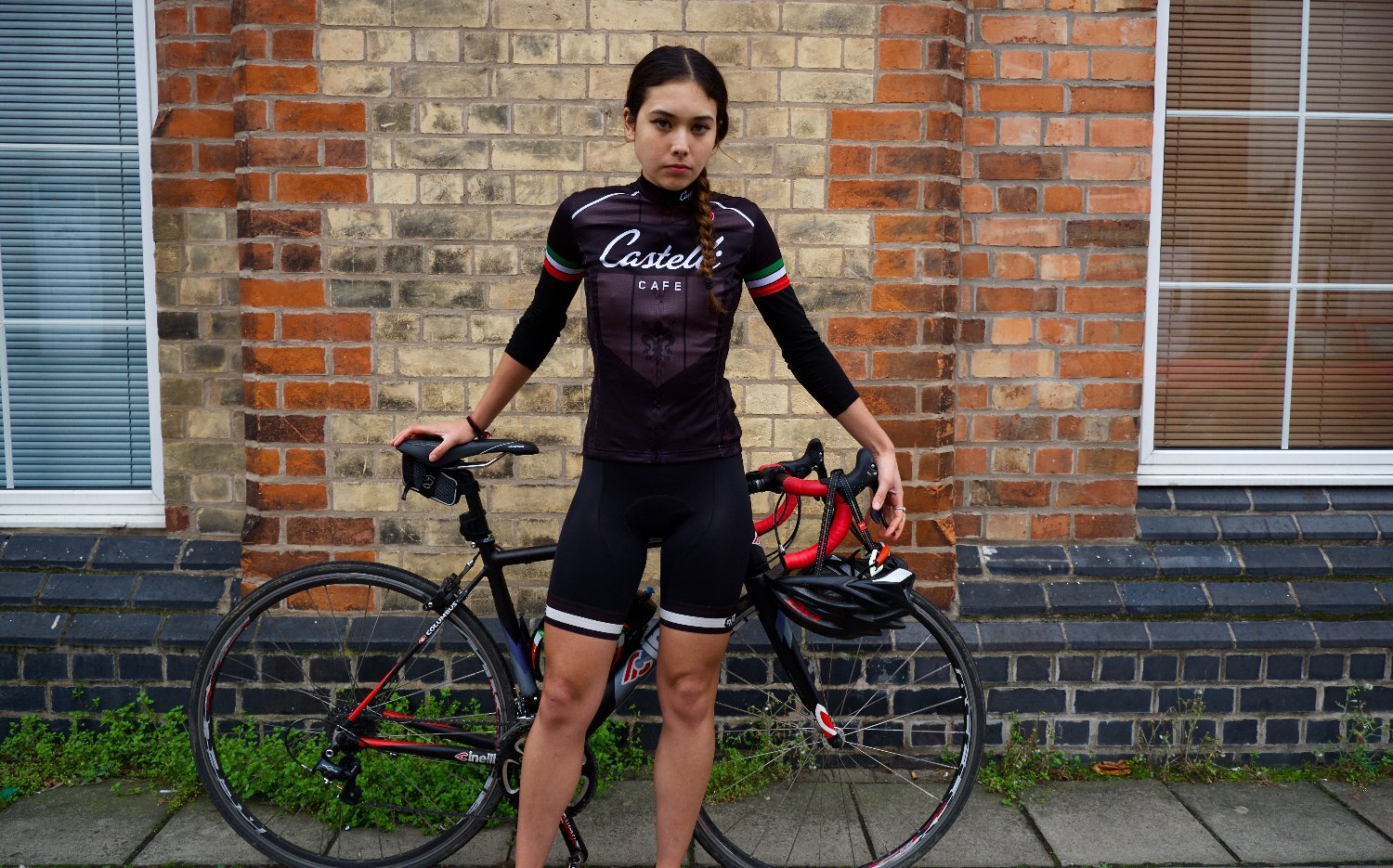 “I got into cycling seriously when my brother bought me a Garmin,” Fiona Aylward says as she stands, hands-on-hips, inspecting the clutter of bikes, turbo trainers, shoes and gear that litter the small furniture-free front room. “That was when I discovered Strava, and suddenly I had loads of people to compete against.” She grins with a gritty confidence, and then walks into the next room and settles down on the sofa. 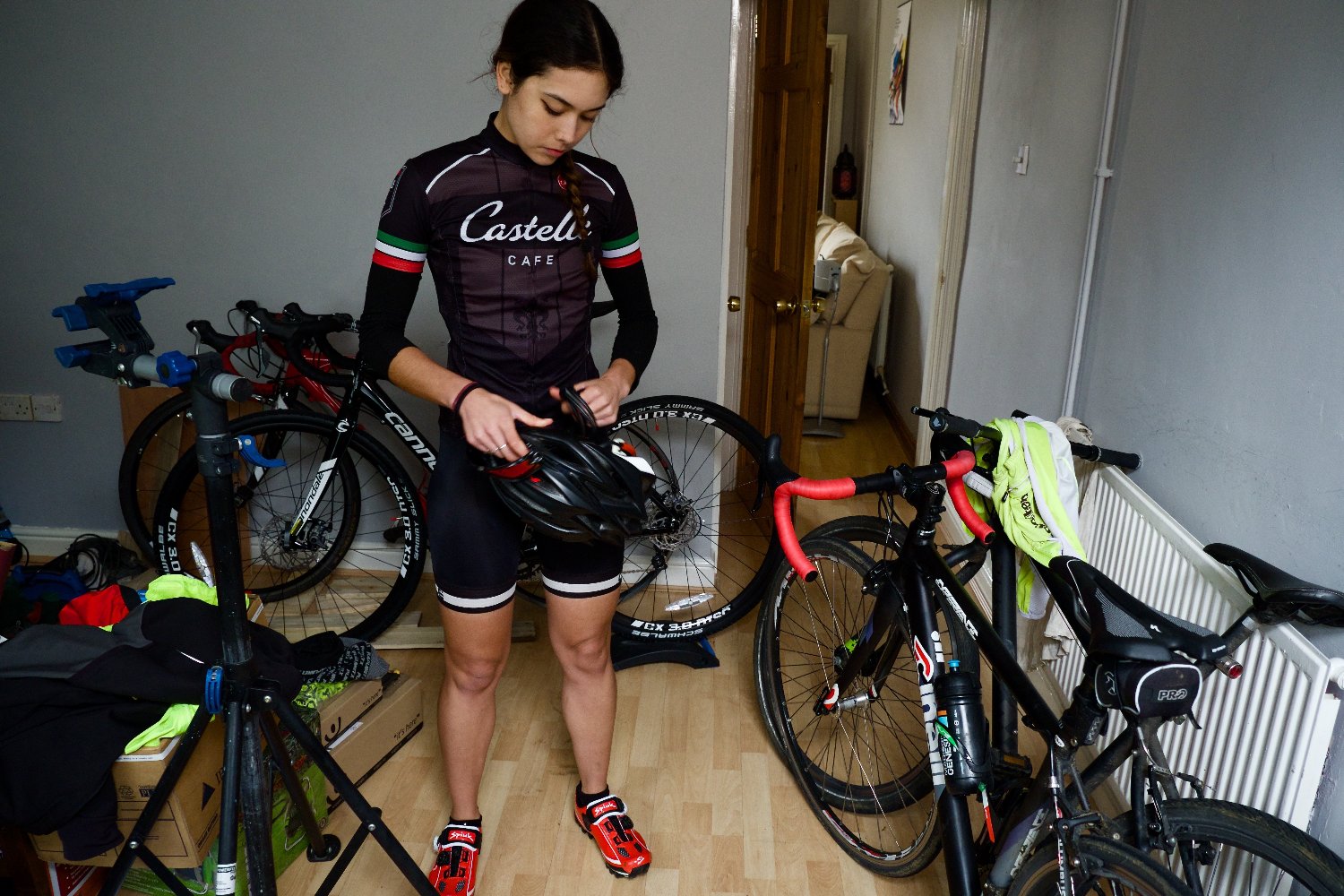 I sit down opposite her and watch as she lets a large fluffy grey cat – aptly named “Mr Cat”, she tells me – curl up in her lap. Still clad in black Castelli Lycra from her 40 mile ride this morning, Aylward’s affection for the cat does nothing to lessen her strikingly assertive demeanour. At 23 years old, and a lithe 5 foot 5 inches, Aylward is just entering her prime, and has started to set a strong platform for her next competitive year. Positioned with modest pride on a shelf in the corner of the room are the trophies for the Leicester Forest and Ratae Road Club hill climb races that she won earlier this month. Although pleased she won both races, she doesn’t hesitate to point out that both events were small, local races, and that her female opposition were few in number. I say her victories shouldn’t be down-played and she accepts this gracefully, but doesn’t budge from her critical assessment of her own performance. 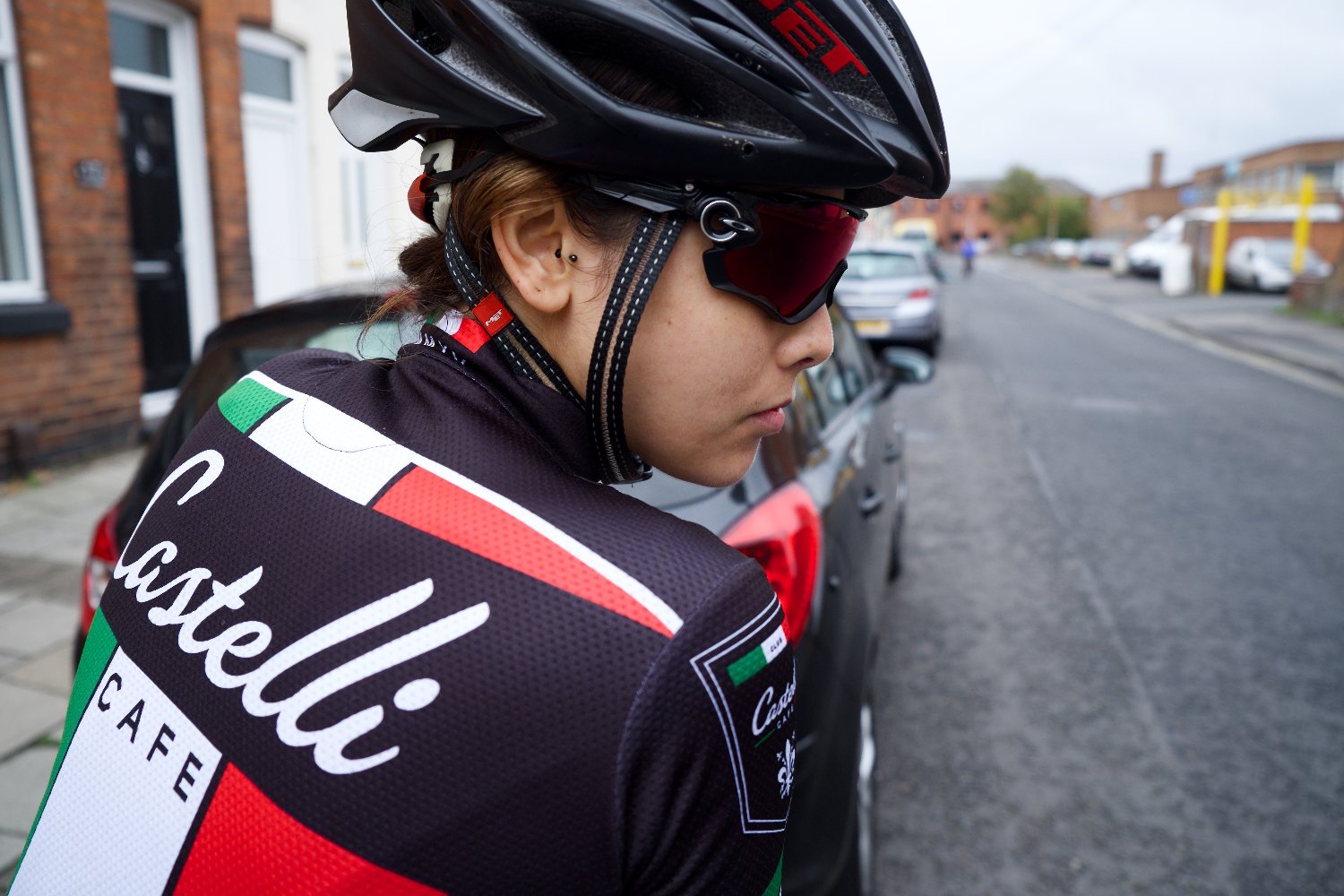 “The problem is that the presence of women at the smaller events is next to nothing,” Aylward explains, “so the competition isn’t fierce.” Still stroking Mr Cat, she continues and tells me she accepts that she needs to enter the bigger events to discover how quick she really is. I ask what her plans are and how big she’s aiming for. “Next year I’m going to start by entering open competitions to build up some points, because you need points for Nationals,” she answers. “I’ll be entering time trials, and then the hill climb season will start. My main aim is to get some good placements and then I’ll have a better idea of what I need to work on.” 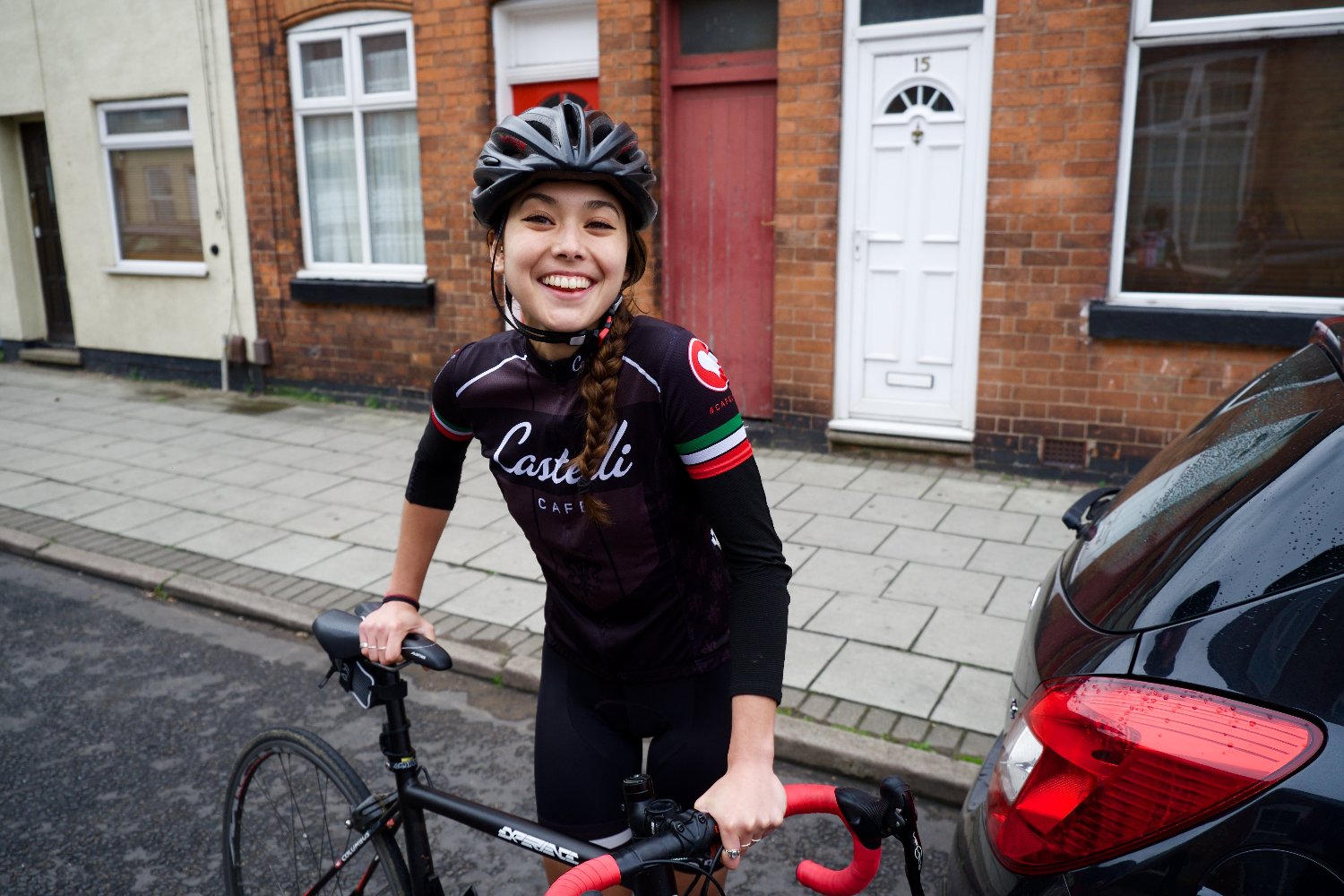 I remind her of a previous conversation we had, in which we discussed why she loves cycling so much. Her original explanation had been that cycling and Strava, a popular cycling GPS tracker app, have taught her how to set realistic goals while challenging her own physical and mental strength. So has entering the National competitions become a realistic goal for her, I ask? Aylward nods, apparently unsurprised by the question. As she sees it, entering Nationals is definitely feasible, but doing well against a new standard of opposition will be tough. “I love to push myself,” Aylward says, now ignoring Mr Cat and instead absent-mindedly twiddling one of several silver rings on her fingers. “It’s always painful, but that’s how you stretch your physical ability. By making realistic goals, however big or small, it means I’m always pushing in the right direction.”

Moving the conversation onto her weekly targets and training plans, Aylward describes her average week. “Ideally I like to aim for about 150 to 200 miles in the week, plus another 100 miles each weekend,” she says. After I point out that winter is fast approaching and the light is now fading fast each evening, Aylward says she plans to tackle the winter months by leaving the road and moving into cyclocross. This dramatic change in training, while better suited to winter weather, will also help keep her focused and motivated. “I’m going to enter my first cyclocross race at the end of next month,” she states, already firmly set on her next short-term goal. “I can’t wait to start.” I ask her why she’s so keen to get started on such a challenging off-road cycling-style, and she reiterates her strong desire to test her own limits. “It’s an all-out effort. You’re constantly in the red with no recovery,” she explains. “It’s muddy,” she says with a grin, “and really technical. Bailing is scary but you’ve got to get over that.” 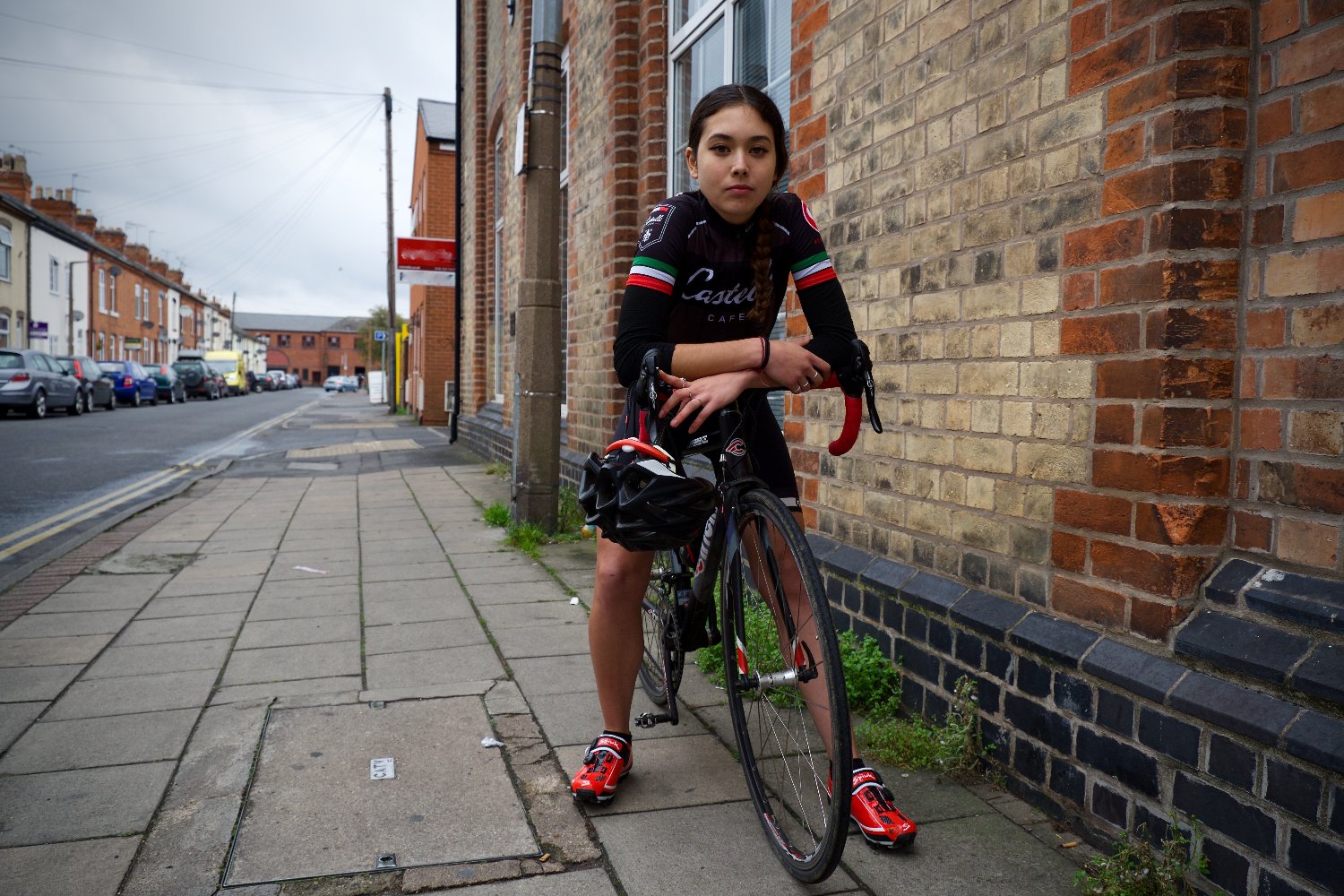 Aylward pauses to finish a recovery protein shake. Mr Cat, perhaps disgruntled by the lack of attention, has taken up a new position on Aylward’s laptop and stares blankly at me while I take a few more photos. Eventually I return to questioning Aylward about her fierce passion for cycling and her determination to move into the bigger events. “I’ve been approached by a potential sponsor,” she says happily. “You don’t get many people who want to support women’s cycling so I want to be a part of that.” Representing her gender and encouraging other women to join her in the sport she loves are exceptionally important to her. I ask her why cycling is something that more women should get involved in. “Cycling gives you a tough kind of fitness,” Aylward explains. “Mentally and physically it drags you through some shit and then it pushes you further than you ever thought you could go.” She also says that the sport is not only versatile, but something you can do long-term – unlike sports such as running, perhaps. “It’s all low impact if you get your bike set up properly,” Aylward says, “and that means you can cycle until you’re 80.” 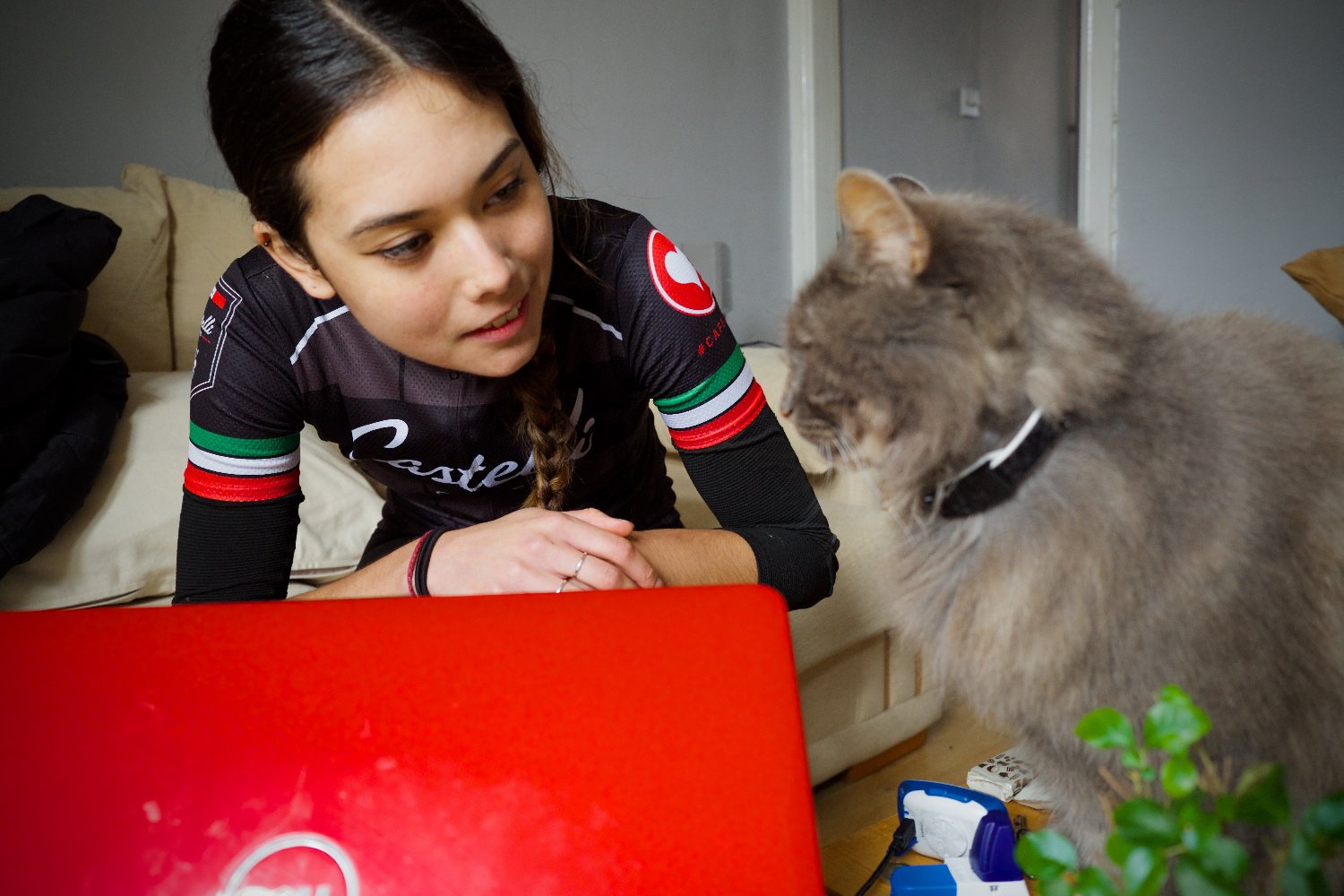 Conscious of out-staying my welcome, I move onto my last few questions and ask Aylward whether there is still room for improvement for women in cycling. She nods and says she believes that women cyclists are still treated differently. “It’s like we have a biological disadvantage that we can’t get rid of,” she says. “But women are fast. We need more support and encouragement.” I ask her whether she has had any personal experience of this differential treatment. Pausing to think for a moment, Aylward nods again and says she has. “I can’t stand being overlooked just for being a woman,” she says sternly. She recalls a recent day out with work colleagues, many of whom where serious cyclists and all of whom were male, on which they visited a velodrome. “When they were talking us through everything before we started, no one noticed me,” she says, evidently frustrated. “Then we raced and I was only half a second off the lead. They were totally shocked.” 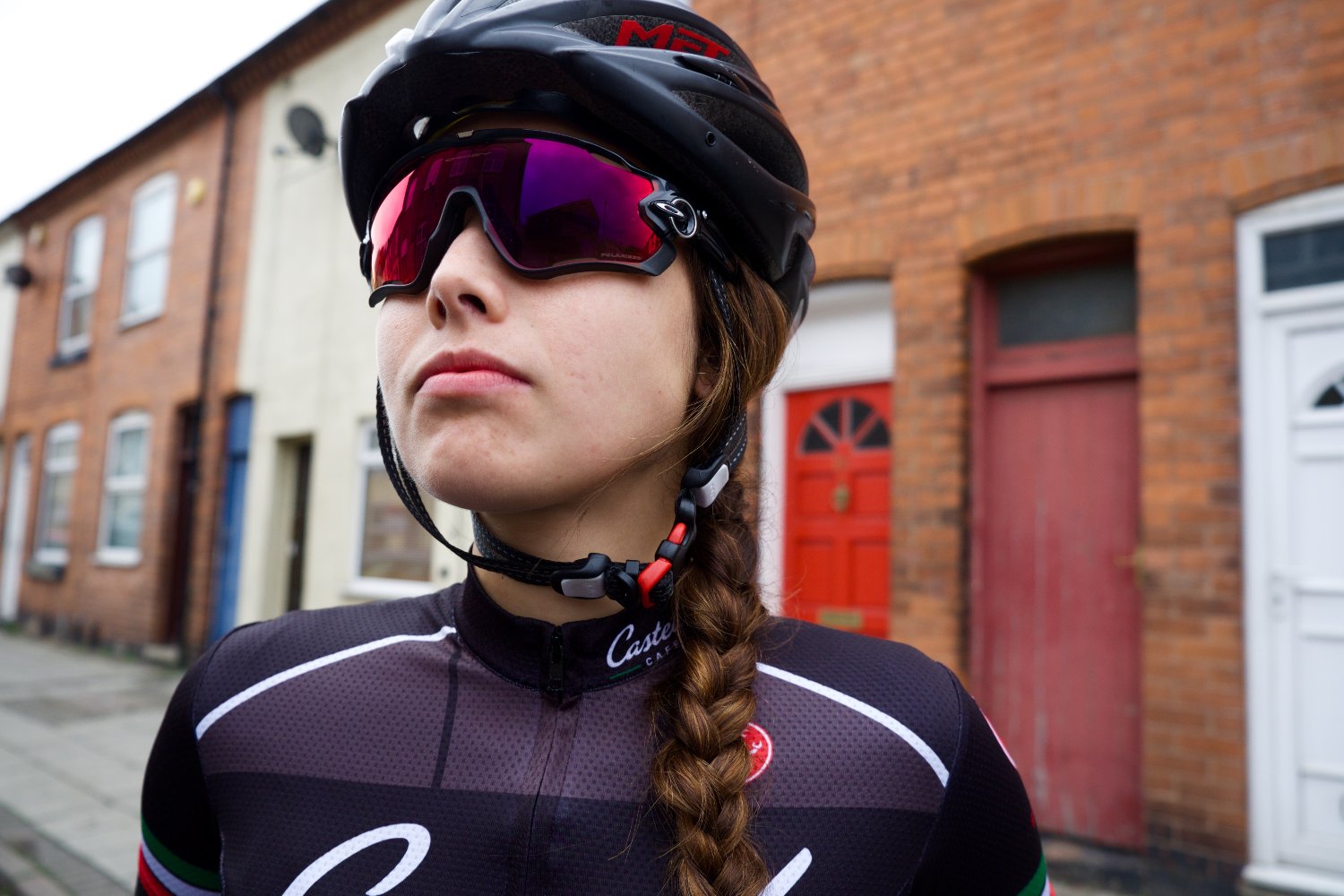 Agreeing that this sort of disbelief is something that needs to change, I ask Aylward what she wants to see in her sport most of all. “I just want to be seen as a cyclist, not a female cyclist,” Aylward says. She elaborates and explains that it’s not about the winning, or the creation of more competitions in which men and women race against each other as equals. Instead, she emphasises a specific longing: she doesn’t want to be treated differently. “I don’t want to try to be as fast as, or even faster than the men,” she says adamantly, with barefaced tenacity. “But if I do turn up, just don’t be surprised that I’m here.” 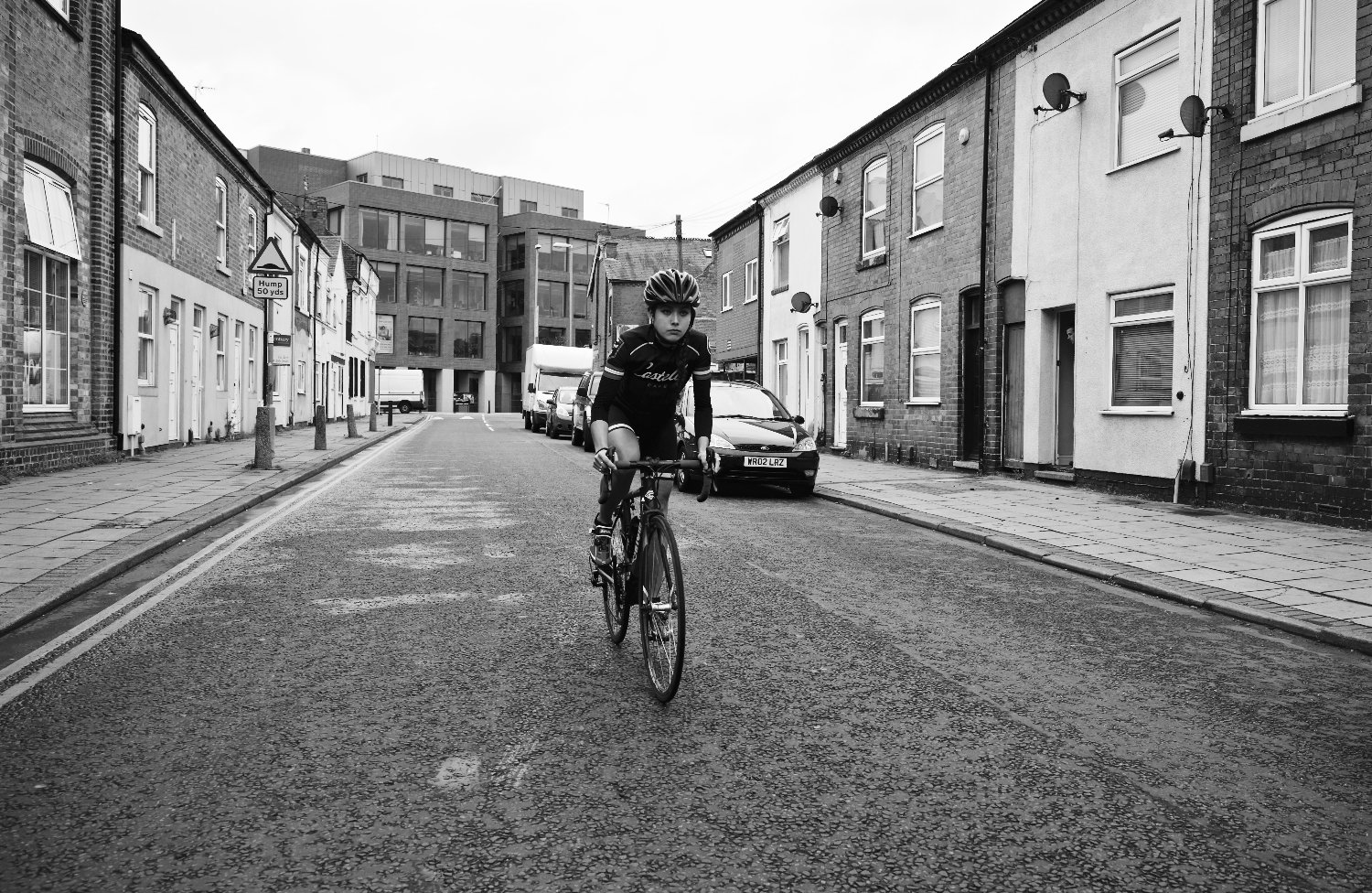