I haven’t been too attentive on the blogging just recently but Love-Velo.cc is making a come back! I thought it might be an appropriate post to put together a little season round up of some of the things I have been up to on my bike and so this is a post about road racing for me this year. I have featured a little bit about some of the races I have taken part in and how they went. As usual were always looking for new contributions and so if you are a budding writer or photographer or if you just want to share your story or tell us about an event you have taken part in then please do get in touch. 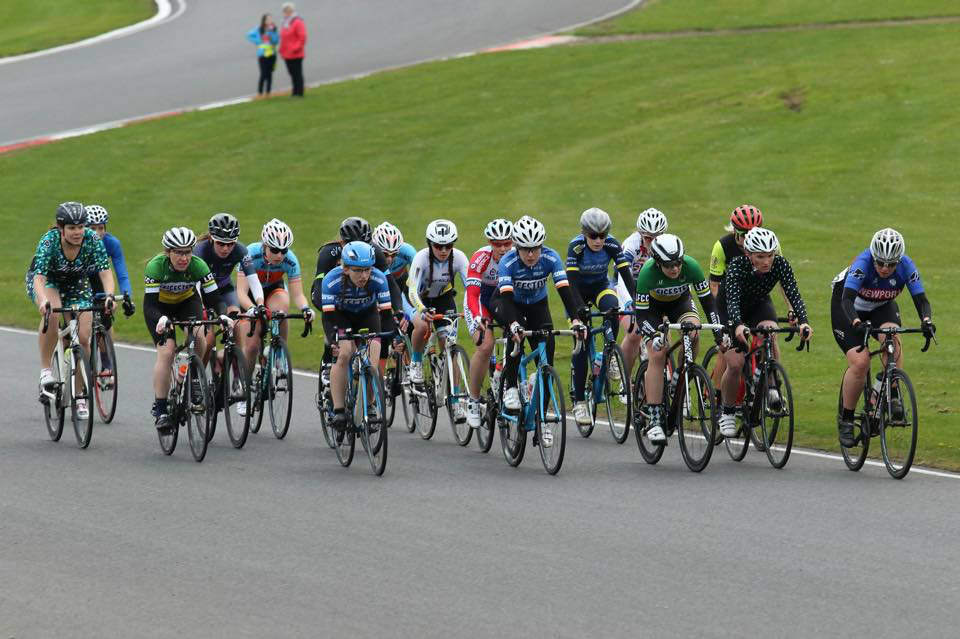 I really didn’t have the best winter, I had good intentions and plans to get a good winter training base beneath my wheels and yet for the second year running was struck down with illness over Christmas. This wiped out just about the whole of January with a really chesty cold. Not enjoyable especially as I was itching to get racing as early as possible. I had my cat 2 license to work towards and wanted to get on the case ASAP! The start of road trips with Peaches for the year. We headed off with predictions of 20mph winds. Not the most ideal conditions for an open airfield where the wind sweeps ruthlessly across. The racing after a few laps splintered and soon we were in small groups of 5-6 riders. There were lots of attacks, some moves which I covered which didn’t stick but then I missed the main break. I stuck in with a chasing group and was pleased to come third in the sprint for the line but with several riders ahead putting me into 7th position. I was pleased with that, the journey for cat 2 points had begun! 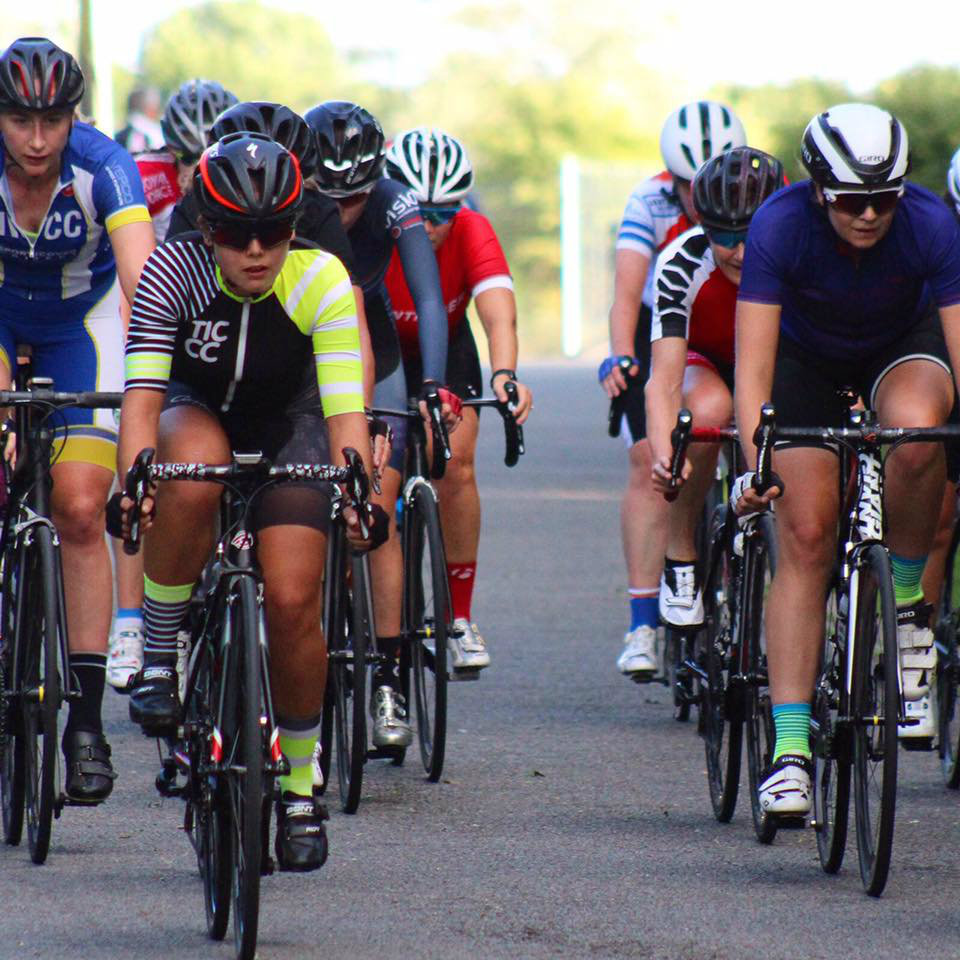 This one was a sharp reality check! Again my LFCC buddy Fiona and I were keen for some more early season racing that and we love a road trip catch up and so there I was heading East on a Sunday afternoon. standard of racing was high, it was a circuit with hills, I wasn’t fit enough nor in a good position and so was spat somewhere within the second lap. Oh the joys of road racing, spending a few hours on the road to then be dropped! The road trip company was spot on though.

‘ a soft landing of grass but also into a thorn bush… ‘

This is a race I had erased from my memory and its only now I recall some of the finer details! The group riding was pretty poor and really twitchy, riders not holding their line, chopping across to improve position and it was pretty hard to keep out of dangers way. I think there were three crashes in this race, I was caught up in the second one. On the hill I just felt something dragging me backwards and as hard as I tried to keep pedalling forwards I couldn’t correct it. Next thing I’m crashed off the outside of the track, a soft landing of grass but also into a thorn bush. It’s always great to have team mates to rely on when it comes to pulling a thorn out of your backside. Not one of my finer moments in my racing career but a learning curve all the same. It’s just frustrating again when you travel to races and things go wrong through no fault of your own. I was well positioned when that happened, in the bunch and then that’s it, all over! The highs and lows hey. 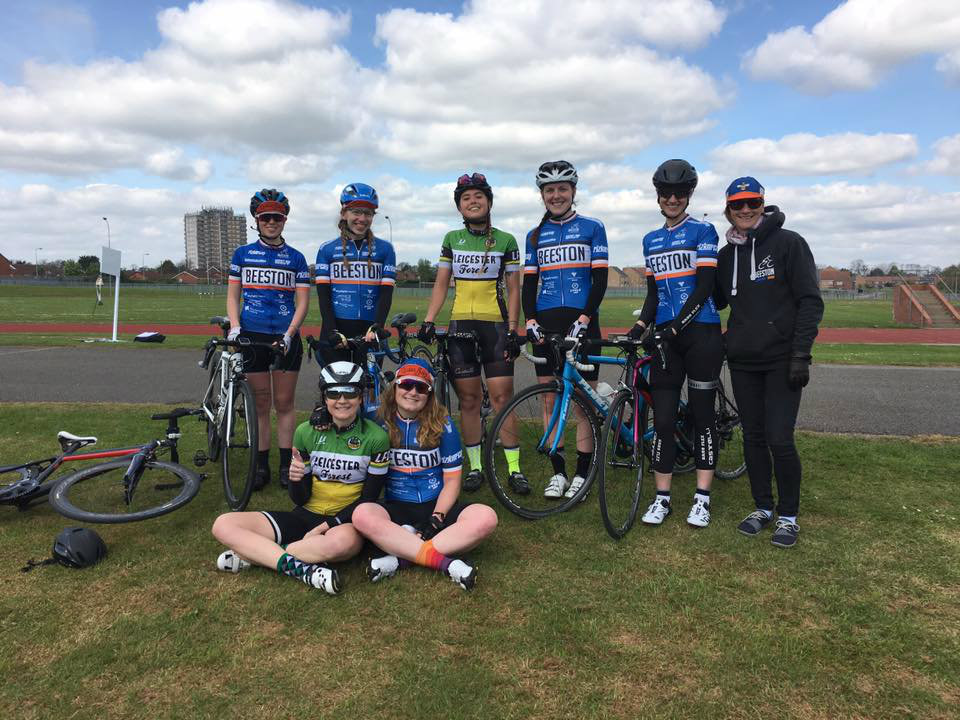 With buddies from Beeston CC

The course here is a twisty technical circuit with what feels like constant tight bends, its flat though. The days racing at this event had two women’s races, a 3/4 race and then an E12 race. There were 15 on the start line for the 3/4 race and I was quite hopeful that if I could get round the corners quick enough that I could do a good job. The bunch slowly splintered until we had about eight riders, mainly working together. There were riders from the Army and RAF cycling teams and the Beeston CC girls pulling some quite hard turns on the front and I have to say at many points I was hanging in as best I could. The count down for the last three laps was soon on when on the second lap to go there was a crash of three riders right in front of me. I avoided it but had to slow and get round, two riders then got away and there was no catching them. I sat in and then was pleased to take third in a close sprint for the line with two Beeston riders. Luckily the crashed rider was OK and it was a nice sunny day to watch some racing.

I really like this course, it’s quite flat with a drag but fast and flowing. I kept trying to attack and get out but couldn’t quite get away. It came down to a bunch sprint where I came third, but just wished I had sprinted a bit sooner as I think I could have done a lot better. Always something to learn! 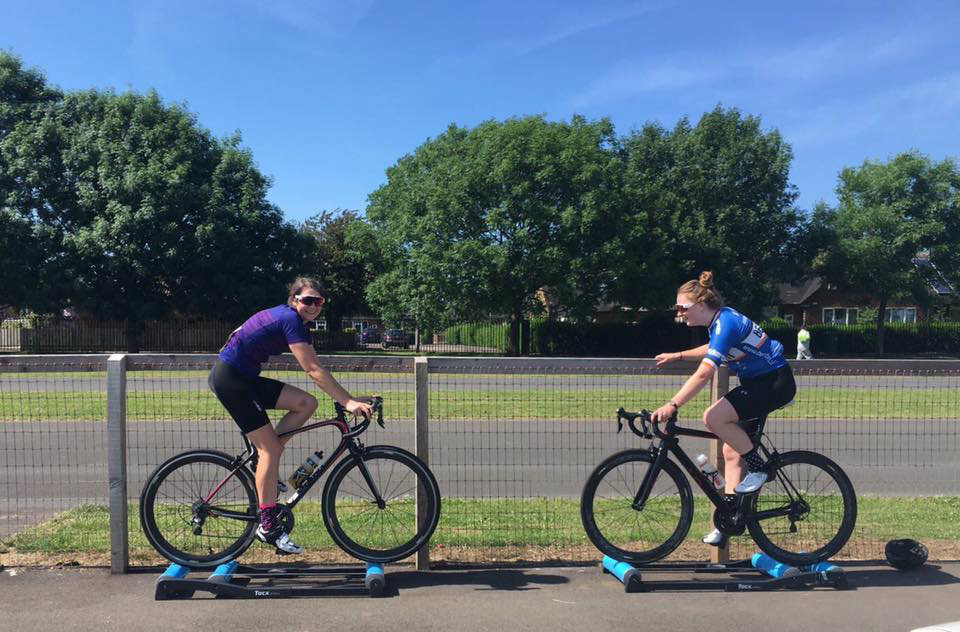 ‘ It came to a bunch sprint, finished 5th and finally those points to get my 2nd cat license ‘

It’s a tricky little circuit, two quite tight corners that are draining after a while. In hindsight I was still tired from my annual alps trip but was keen to be racing and hopeful for the final points to finally get my 2nd cat! I have trained on this circuit a lot during British Cycling women’s coached sessions (highly recommended) but still find it a tough one to be racing around. For the main part the bunch stayed together, I had planned an attack on the last lap but my legs just weren’t so keen. It came to a bunch sprint, finished 5th and finally those final points to get my 2nd cat license. 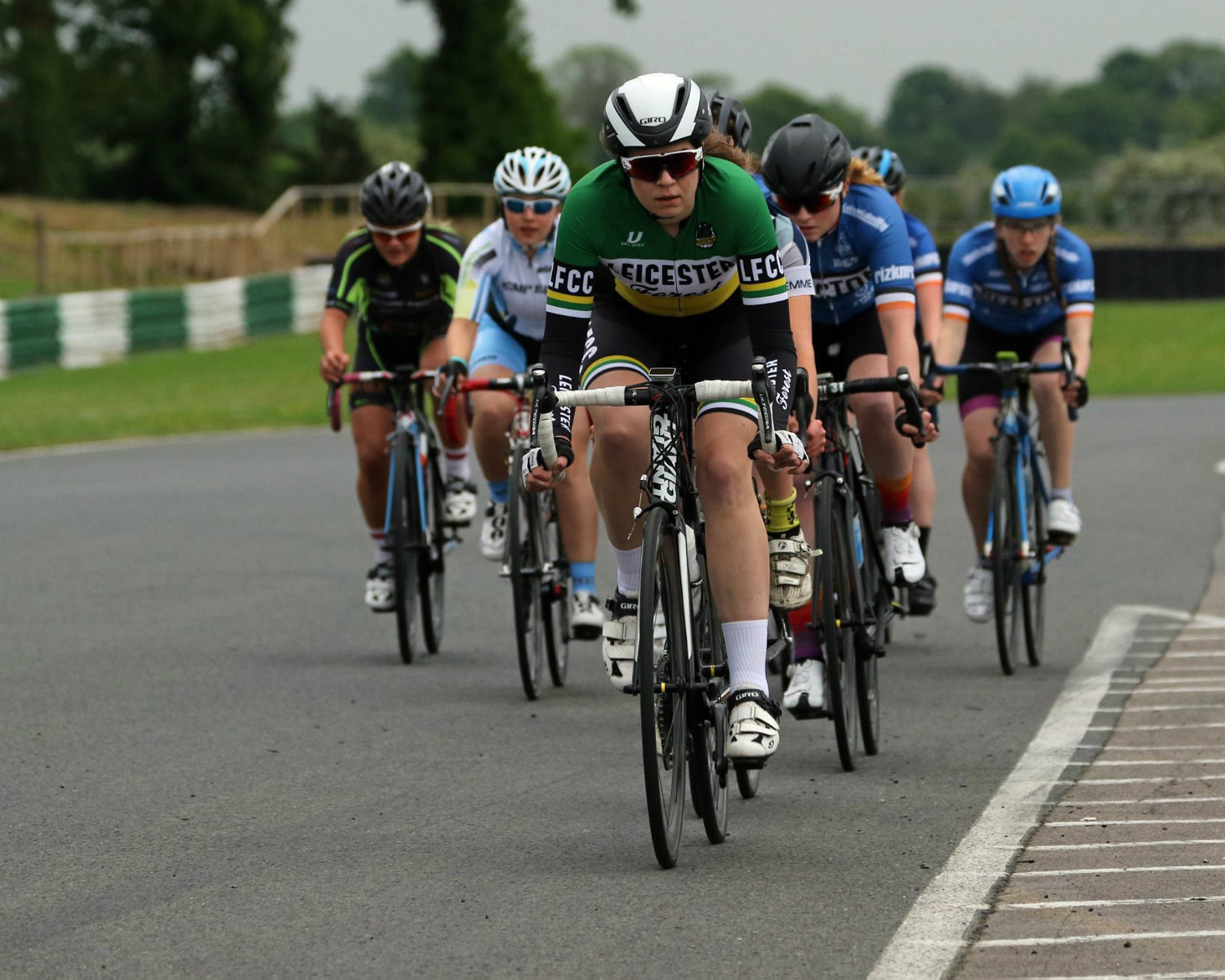 This is my local circuit and for the past few years they have really struggled to get female numbers. I was quite excited that there was to be a women’s league for the 2017 season and even more so when each week there were 20-30 riders on the start line. Not just that but the standard of racing was pretty decent too! Many of the local clubs in the midlands areas had riders with several from Coalville Wheelers, Beeston CC, Team MK and of my own team of 4 riders from Leicester Forest CC. However most weeks saw a dominance of talented Team 22 juniors, Phoebe Martin and April Tacey who had us working hard to keep up and usually taking a 1-2 at the sharp end of the results! The course changed every week with the circuit adding in hills and chicanes to make it more interesting. Across the four races I was pleased to finish somewhere in the top 10 every week and it’s a league I hope continues for 2018. 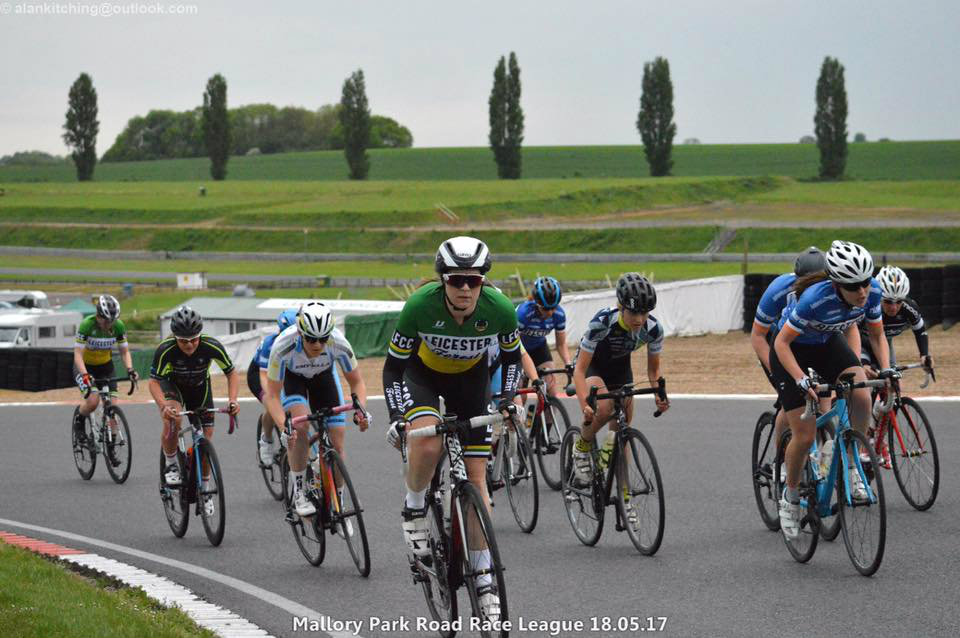 This is a race from the women’s team series, it’s pretty much on my doorstep and so I really wanted to give it a go and I’m glad I did. In hindsight the worst thing I could have been doing with two weeks to go would be a girls holiday in Portugal. I had a great and wonderful time, but it really isn’t good race preparation or good mid season at all! I had ridden a recce in the week and knew I was going to have to put in a hard effort to stick with the bunch on the climbs. Managed three laps with the bunch before being outclassed on the slopes! I rode the final two laps 2up with a another rider who kept me going, otherwise would definitely have pulled up! One for next year though.

Lesson for next time – ensure well positioned going into big climbs, aim – not to be dropped!

So its been a good season, plenty of good moments, met lots of lovely people and lots to work on and train for next year.