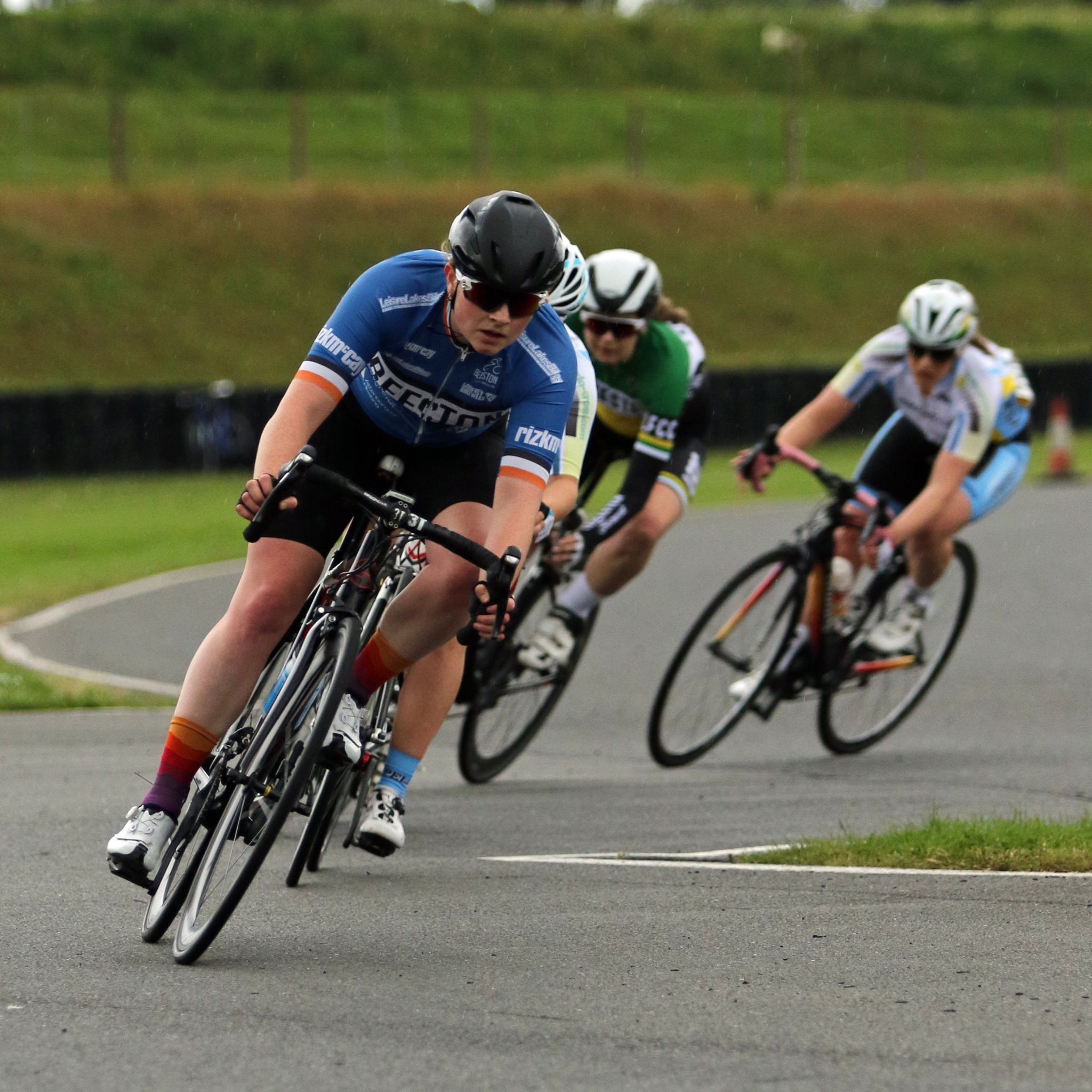 Its been a while since we featured a rider interview, but here is our interview with Beeston CC Women’s Race Team member Izzy Wild. A few of the other Beeston girls have agreed to take part and so we hope to post these in coming weeks. This is the first year that Beeston ‘Queen Bees’ have had a women team and with great success. With several riders getting their 3rd and 4th category licences and seeing riders often in the top 10 in races across the East Midlands. Im sure that more success will follow into the 2018 road season.

Here is our interview with Izzy…

How long have you been cycling for and how did you get into it?

As a hobby, for a couple of years… I started with commuting into Uni with my mother’s 20 year old Raleigh town bike with a handy basket! This was merely a 10 minute trip twice a day, which I really enjoyed and I began to go on relatively longer rides at the weekend, which included a 40 mile trip to Melton Mowbray cheese festival – the basket proved very helpful for cheese transportation! After this I realised that perhaps I would like to get a proper bike to make my adventures easier – being at uni in the Midlands, a road bike seemed the most sensible option.  My parents kindly gave me a Merida Ride beginner road bike for my 21st and I have not looked back! 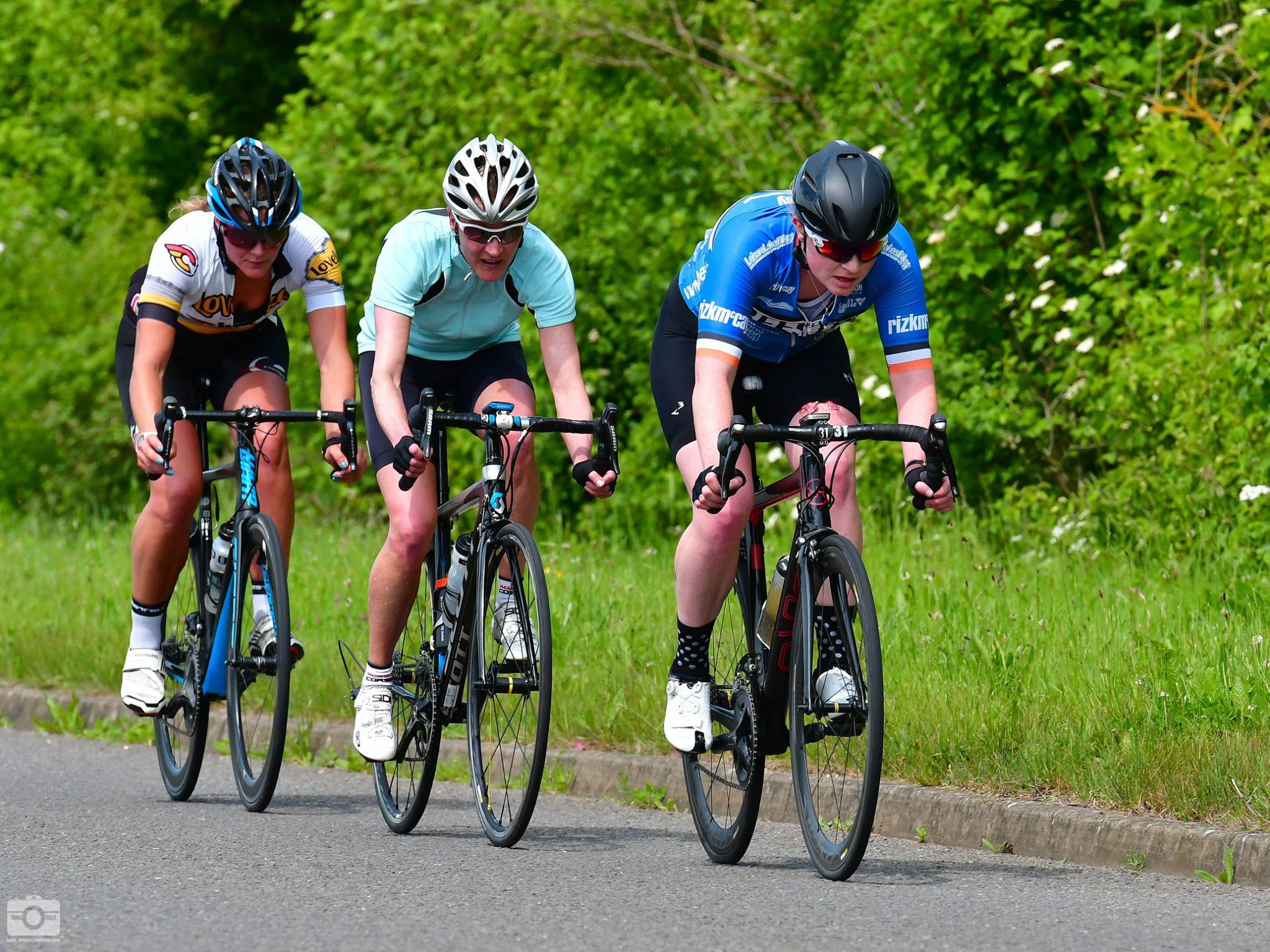 “My parents kindly gave me a Merida Ride beginner road bike for my 21st and I have not looked back!”

I joined my campus cycle club ‘SBABES’ (Sutton Bonington Adventure Biking Enthusiasts) as one of the few lady members but the guys were very encouraging including the wonderful Tom Cox. I refused to wear lycra for a very long time and did a Century ride without Lycra or cleats, with very nutritional Jäger Bombs mid ride for energy and pain relief (what I was hoping for!) but left me rather sick especially after also devouring a huge roast dinner and sticky toffee pud with 50 miles in headwind left to go…

I was not deterred by this and after a Tinder date, I was easily persuaded to embark on a cycling trip to Tenerife, where I found true love in cycling descending down Mount Tiede (after 2000m of climbing….).

Following this, as a new years challenge, and having never done a triathlon, I decided to enter an Ironman 70.3 at Wimbleball, Exmoor. I had done a fair bit of running before with the odd half and full marathon here and there, but wouldn’t classify as a runner and swimming for me involves mainly lying on a lilo with an icecream in hand. Alas, I began to train a bit here and there for it, with my cycling getting stronger. I rocked up to the event on my own, miles from home with no friends for advice and support which was entertaining. Especially as I didn’t get the memo that it was the hilliest course in Europe… To my surprise I did alright and came 3rd out of 11 in my age group and Qualified for the World Championship in Aus later that summer! Coincidentally I was already going out to Aus that summer for a placement, so I took the opportunity and entered! Following my flukey beginners luck, I thought it would be best that I did some proper training and having just embarked on a research masters (at last a salary!) I relished in the flexibility of being able to train twice a day! My nextdoor neighbour happens to be an Ironman Champ and she coached me up… there was a long way to go… I rocked up in Aus and quickly realised I was not an athlete – the fellow competitors were ripped with TT bikes to match. Felt a wee bit out of place on my road bike… The day came and I suffered awful cramp which nearly ended the race for me, only 10km into the cycle with 70km left to pedal and a half marathon to run… Somehow managed to keep going though and somehow not come last (!) Safe to say that has been the peak of my athletic career to date.

When I got back from Aus I enrolled on the UoNCC Track Team where I had the triathlete (which I was barely…) drummed out of me and was converted into a man 1 Team Pursuiter. It was a bit hit and miss with none of us having raced on the track before, but we came 4th at the BUCS University Champs in Manchester which was pretty cool…  Couldn’t have done it without top coach Bryan Steel and the constant harassment from the boys due to mechanical inability.

Shortly after, Bryan put me in contact with Queen Bees (Beeston) DS Sally for the road racing season, and the rest is history! 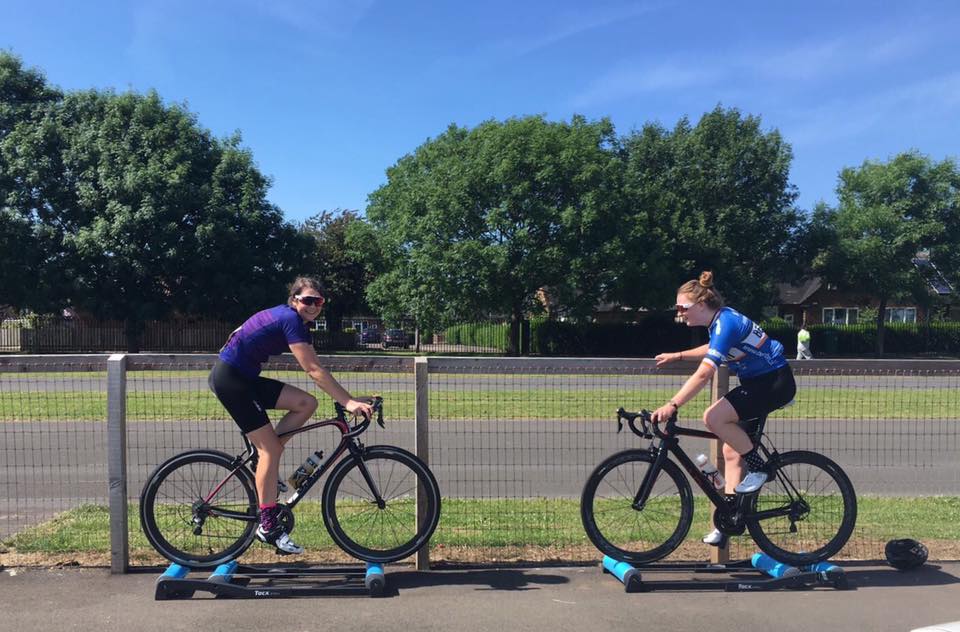 What is it you love about cycling?

My biggest love is a long descent especially in mountainous regions abroad, and feeling euphoric!

Also café rides and the social aspect. Riding my tandem to the pub with pals.

“My biggest love is a long descent especially in mountainous regions abroad, and feeling euphoric!”

What are your biggest strengths on the bike and what would you say you need to work more on? 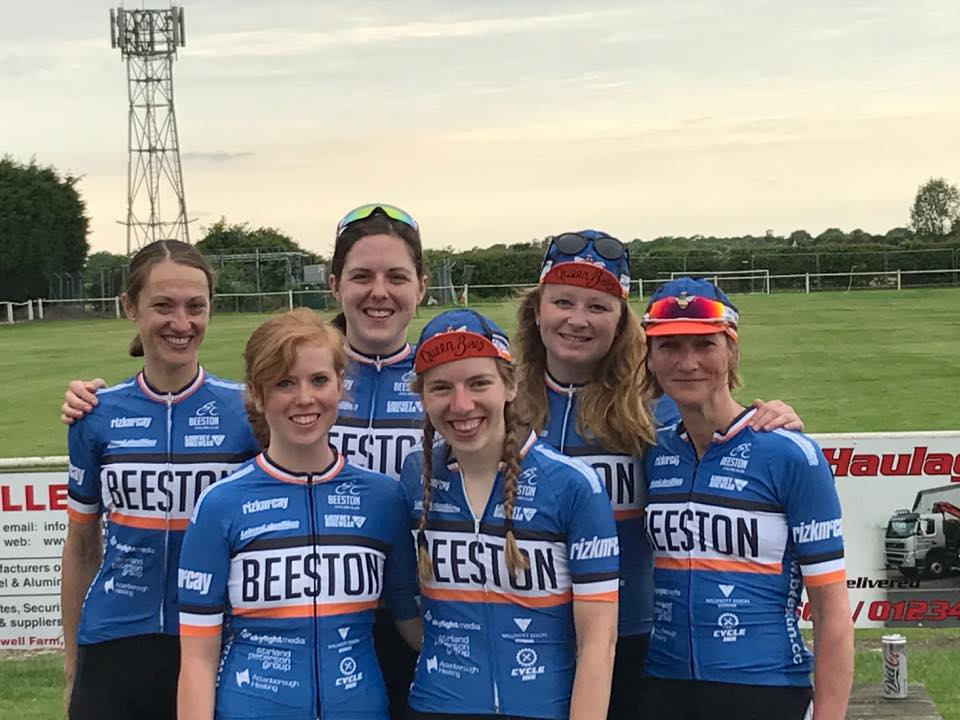 What’s the best part of cycling in a team?

Haven’t had huge success yet, a number of top 5 finishes, still waiting for that elusive individual win!

** Note from the editor – this is not correct, Izzy has had many top 10 finishes and has worked as part of a team to get some great results, also has PB’s at 10TT distances and raced to success on the track!**

What do you think would help grow women’s cycling and racing?

I think just having a few key women encouraging others helps. I am President of our uni club this year and hope being approachable and friendly to beginners will get more on board – we shall see. Perhaps a few womens only rides, but then I personally like riding in a mixed bunch. There are so many aspects of cycling that can be enjoyed, not everyone wants to race which I think is important to appreciate but as more women get involved in cycling in general, there should  more lady racers too by proportion. 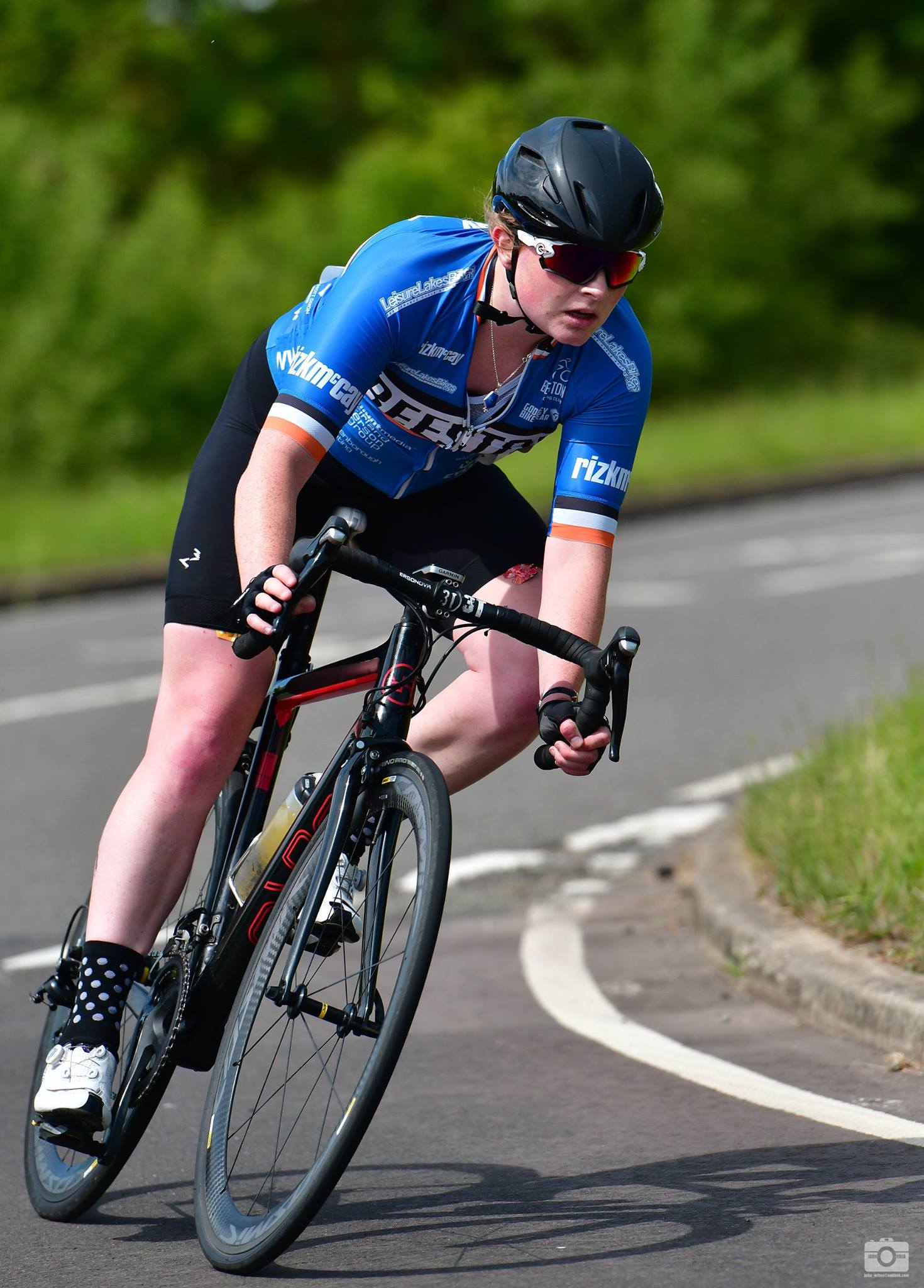 “There are so many aspects of cycling that can be enjoyed, not everyone wants to race which I think is important to appreciate but as more women get involved in cycling in general, there should  more lady racers too by proportion.”

Did you have any aims this year and how did they go?

To just go out and do my first season racing – completed it mate. I’m not that fussed about chasing points, I have enjoyed taking each race as it comes and I through doing so am close to Cat 2. Would still like to win a race though – have had a number of close calls!

Have you any tips for riders taking up racing?

Just give it a go, hang on in there! Do some turns and people will have more respect for you as a rider. Take advantage of the BC race training days and make sure your bike handling is up to scratch before you do your first race. Do some chain gangs, train with men for added fitness – I have enjoyed doing a few mens 3/4 races this year just to see how long I could stick really.

I you would like to take part in our rider interview please get in touch – we welcome all cyclists from tourers to commuters to racers!