I had recently written about the Kidderminster Killer audax, and whilst were on the topic of epic rides there is the La Marmotte sportive.This is another ride most certainly not for the feint hearted. A well-recognised sportive in Europe, and known for being very challenging. The route is 174km with three HC climbs and a total of 5180 metres of climbing. It’s a huge challenge to undertake, but one completed by Rebecca Bond earlier this year in the 2015 event. 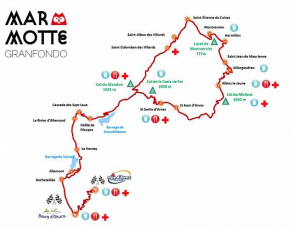 I spoke with Rebecca first about the training for La Marmotte. ‘I really realised the enormity of what I was planning to do during the training on the months leading up to the event as the training I was doing was really mentally tough. I was helping to run kids and women’s training camps in the alps for the first time and so I was climbing every day for ten days. I was shattered and the consecutive days of climbing was exhausting, my legs weren’t used to it. I have a habit of doubting myself, but La Marmotte was something that I really wanted to do and so I just got on with it. I was telling myself not to over think and analyse but just prepare and do, rather than think’. 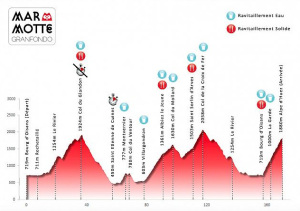 ‘I just knew to pace myself, and kept telling myself ‘ride you’re own ride’. I ignored the fast riders racing off, even though I was worried about being left behind and kept reminding myself to keep eating and drinking. The day of the event it was ridiculously hot, 40+ degrees.

By the time I got to Croix De Fer, the fourth mountain climb of the day it was mid afternoon. I could see that the tarmac was melting on the road, and that my tyres were getting sticky! I was starting to tire, my stomach wasn’t liking all the energy gels and I was worrying that I wouldn’t make the cut off for Alpe D’Huez. By this point it was clear to see that many were struggling; people were being sick, looking spaced out and one lady was crying. I didn’t hang around for long. I wanted to get the last mountain done. I did it, slow and steady and with a few stops. My body was tired but my mind was still there and I was determined.

I loved the journey, and yes I would do it again. I’ve also proved to myself and to the doubters that I could do this. Hopefully others will think if Bec can do it, I can do it’.

Rebecca completed the event in a time of 11h 57mins. Anyone up for a challenge this is certainly one to consider!

Rebecca is a fellow blogger and you can read more about her La Marmotte experience on her blog Tri La Tania.