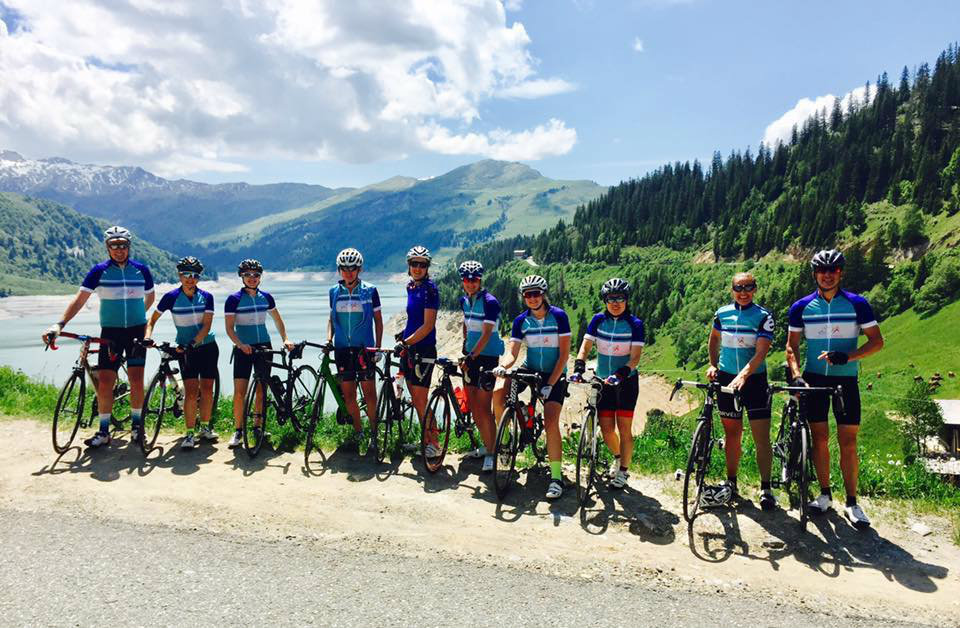 Just a few weeks back I was flying back out to the French alps for the second time, to join the Tri La Tania training camp for 2017. I went on this camp last year and having had such a good time I knew I had to join again for this year. Seeing all of the photos online would have been too much for me to handle. This camp is a women’s training camp based in La Tania, I was joining up with seven other women from cycling and Tri backgrounds for a weeks training and coaching. I knew a few of the other girls but some were to become new friends, by the end of the week you really do feel like a team. 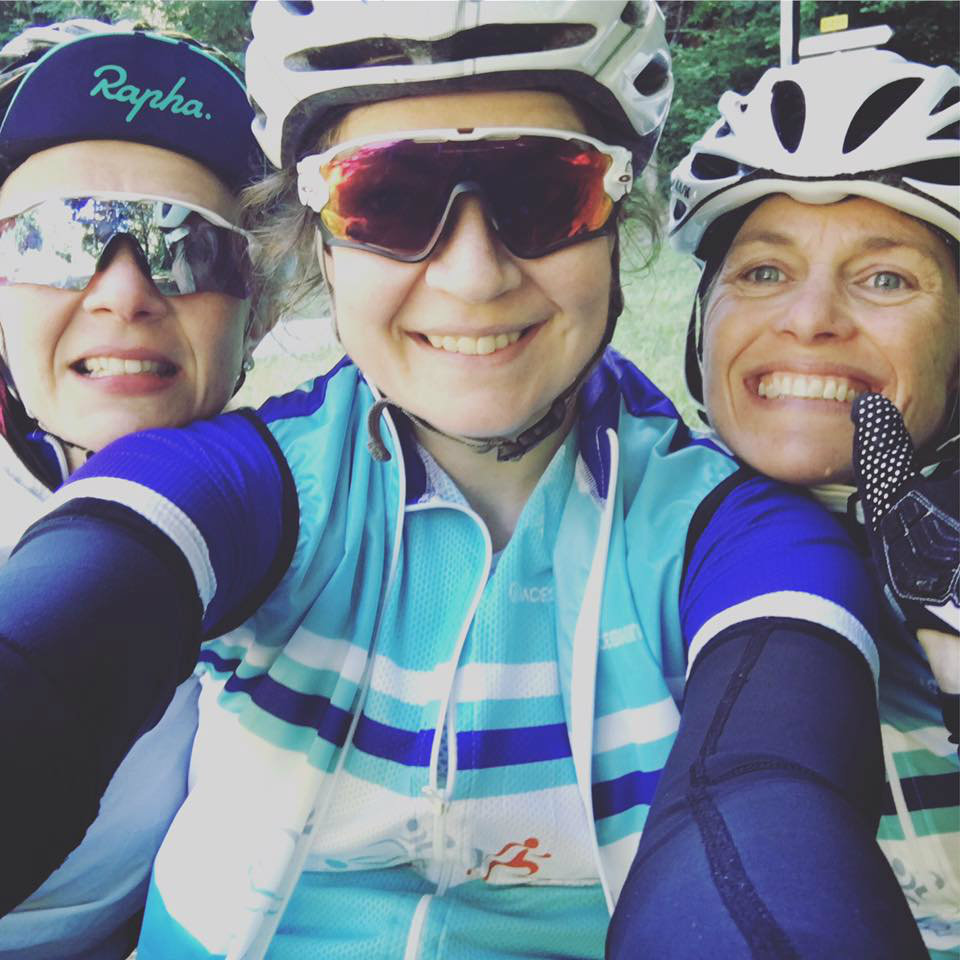 The lead up to this trip was busy! I had ridden the Tour of Cambridge 81 mile Gran Fondo on the Sunday and then had to get home, pack up my bike, try and recover as much as possible and get a few hours sleep before the early wake up call at 3am to make it down to Luton airport in time. Whilst I sat on some grassy area, absolutely exhausted from my ride and out of the way just past the Gran Fondo finish the thought of getting myself ready definitely felt very over-welming. I sat there for a bit trying to drink some water, eat something and sort myself out before making the trip to get myself home to pack up my bike, a daunting thought as I was so tired! Everything else was ready, just another occasion where I could actually be mistaken for an organised person. 3am came far too soon and I was soon in my car and on the M1 driving to Luton airport ready to start the week I had been looking forward to all year. So I have written a little about the rides that I did on this years camp. 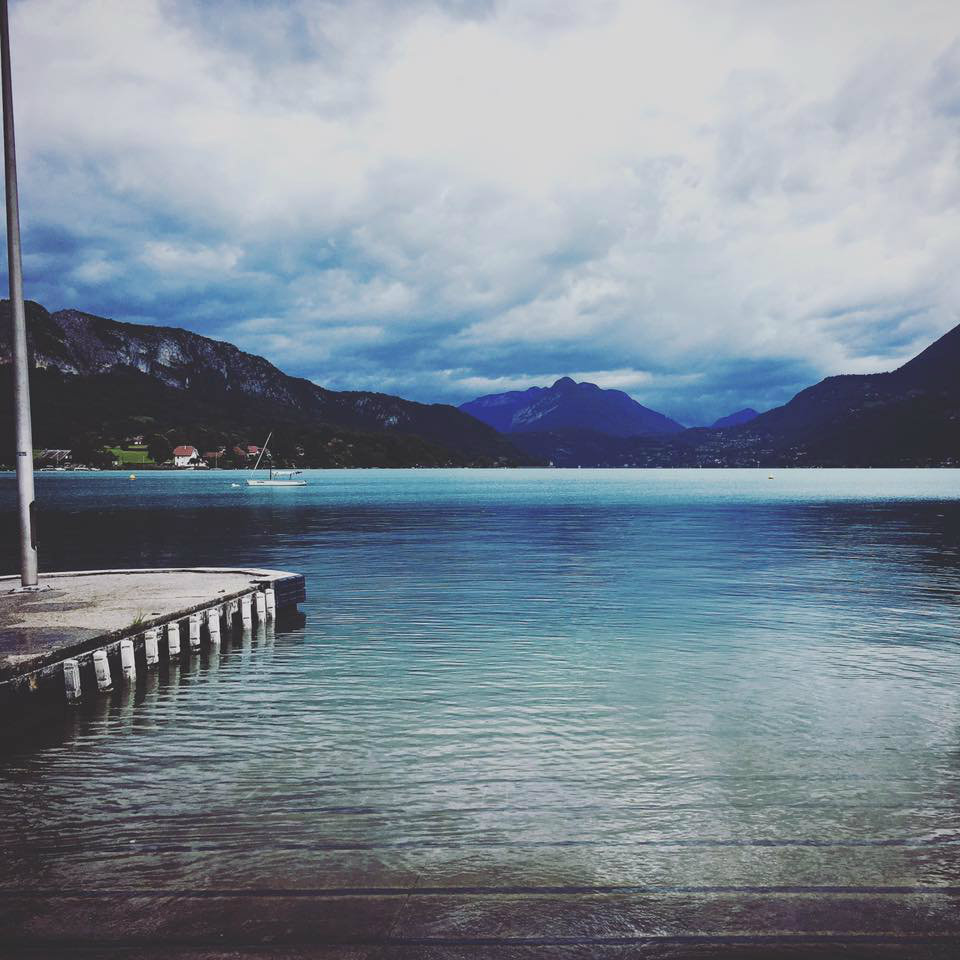 The weather was totally different from when I did this ride last year, we had glorious sunshine then! However the weather wasn’t kind to us and as soon as we had descended down from La Tania we were riding in pouring rain, typically english pouring rain! Luckily we were prepared for riding in wet conditions and it didn’t spoil the ride. Riding in rain is never that bad once warm anyway and its a lovely flat route along cycle paths which are more like country lanes dedicated just for cycling. We didn’t see so may cyclists out on this day, sensible maybe?!

Lake Annecy is beautiful, some of the triathletes went swimming in the lake. Too cold for me though, I need a nice hot day to take a dip! 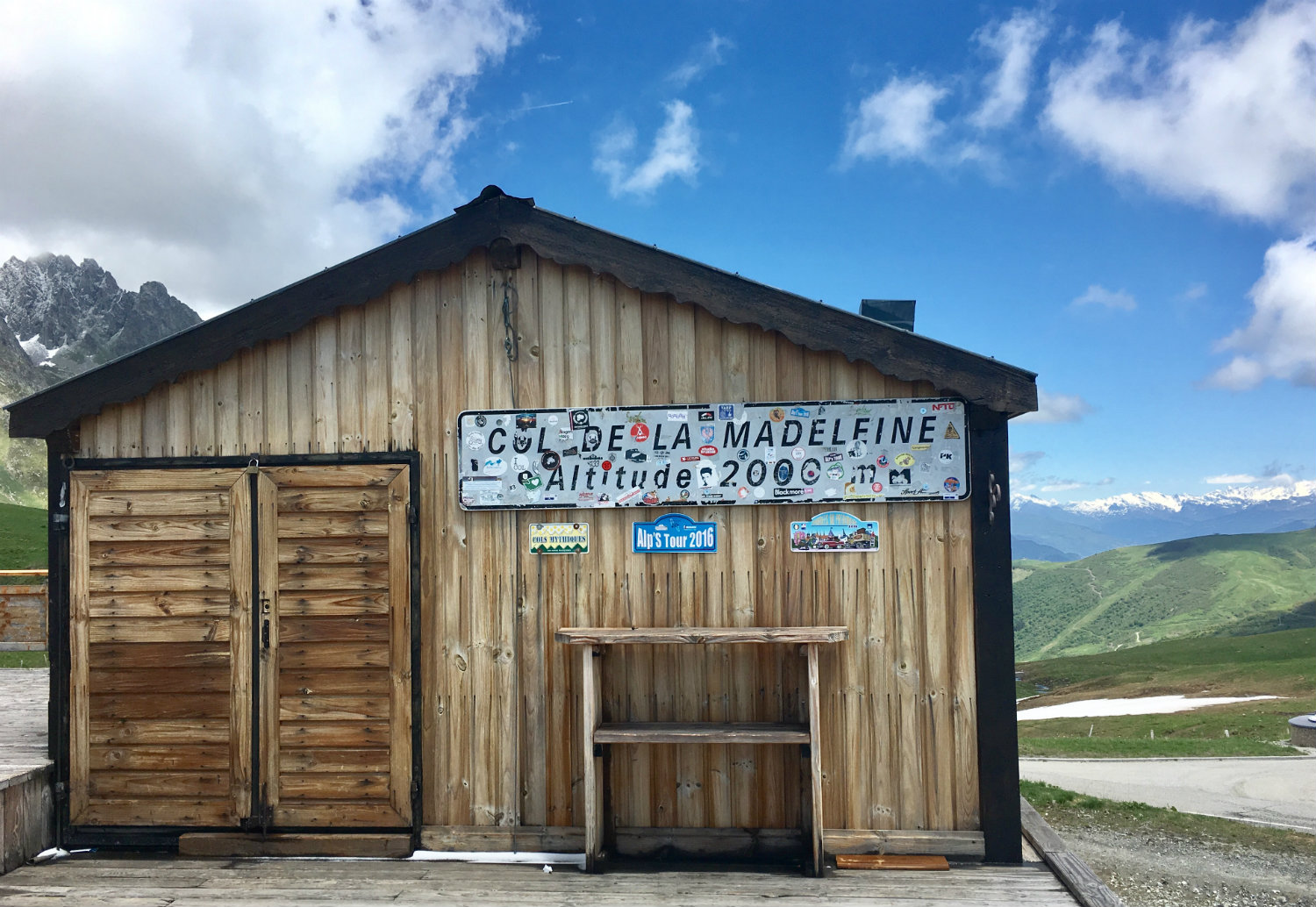 A 15 mile climb which takes you to altitude of 2000m. We rode as a group for some and then split out slightly along the way. I tried my best to keep up with Sally who was also riding during this week,  I couldn’t she was powering up too fast and so I had to let her go! Well more effortless climbing whilst I’m grovelling away. I arrived to the top to find her sunning herself and looking very relaxed. The support team drove up stopping along the way with many supportive cheers, always helps when it starts to get tough. The others followed up shortly behind, we stopped for a coffee and something to eat before descending back down again. Sally and I then rode home, the climb up to the chalet seemed to go on forever with more of Sally’s effortless climbing. We won’t mention that we puzzled for ages on the way feeling lost about whether we were going the right way before getting on the right road, that didn’t happen at all.

A good days riding and then even better to arrive home to dinner on the table, one of the great things about going on an organised camp like this is that you don’t have to worry about things like this. You come home and its taken care of. 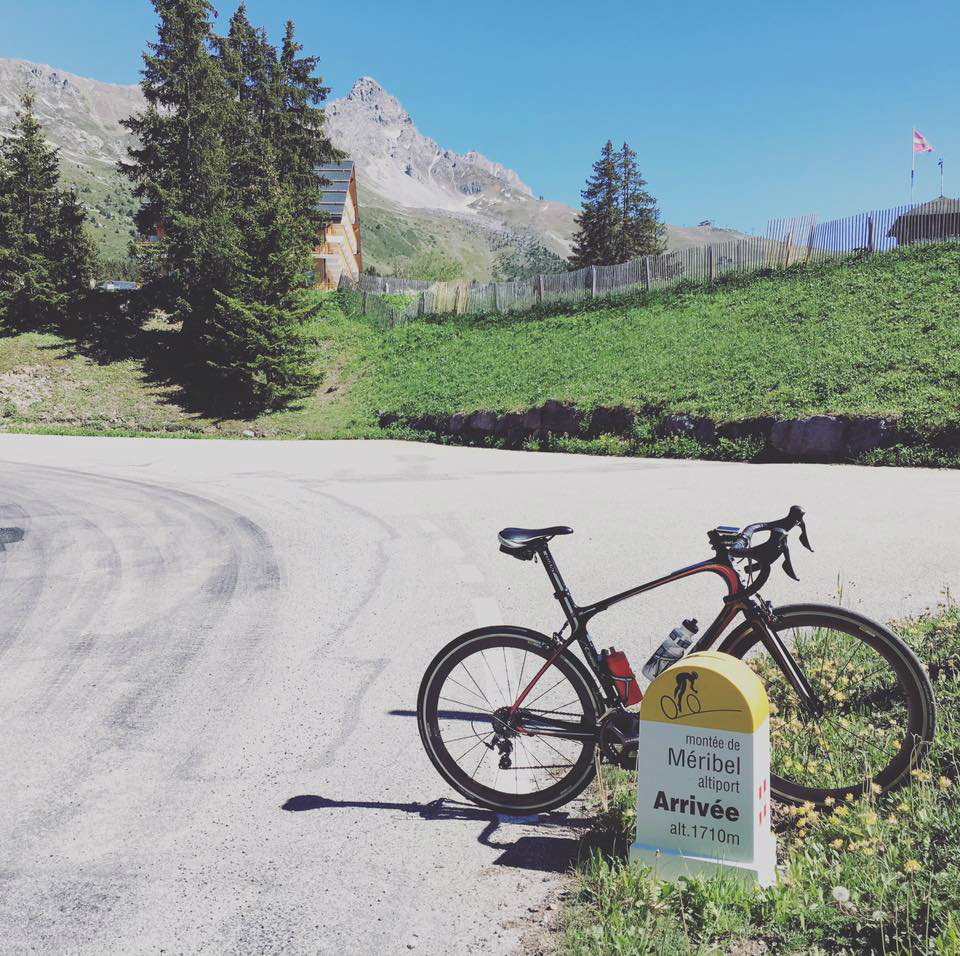 This was a scheduled rest day but as Sally, Richard and myself arrived later than some of the others Coach Dean had suggested a nice route to do.

Again there was some getting lost involved, getting lost that adds 800 plus ft to your ride, also that takes you further up the valley for even better views. I was so sure when the Beeston CC club secretary, Richard was planning on taking us on some off road track that would ‘ definitely get us back on the route’. I managed to convince him with the powers of modern day technology that we needed to go back down and then get back on the correct road. Deans route took us up to Meribel and then to the Altiport. Sally and Richard weren’t fancying the extra 6km climb to the top, I carried on anyway wondering if I would pay for this. However it was a great climb up there, always find it bizarre riding through totally deserted ski towns but just love the tranquility and views up there. Put in an effort in the last few KM to strava QOM the summit, amazingly. Think Emma pooley hadn’t ridden that climb! That then was the climbing mostly done for the day, spin back and have some dinner and recover for the Cormet De Roselend the following day. 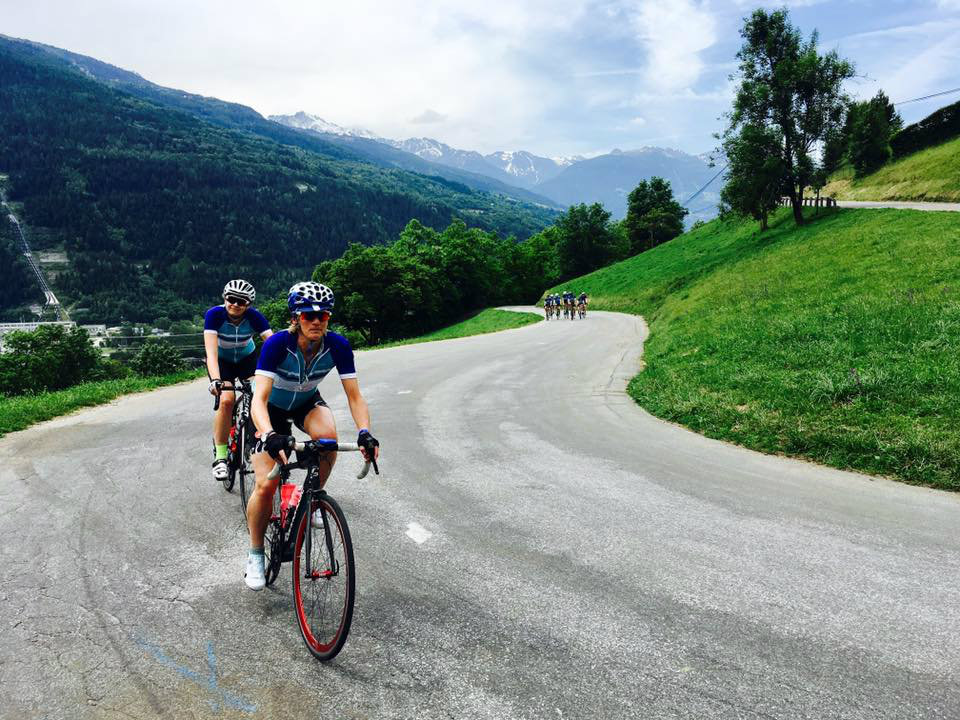 This is a lovely climb that climbs up through woodland and then opens out nearer the top.

We started as a group climbing, but once again I found myself riding with Sally, chatting for a lot of it until 5km to go and once again the effortless climber starts pulling away. Anyway, its good training having someone to follow up there! I was feeling much more confident descending this year compared to last, top speed 52.3mph! Surprising! More confidence needed on the hairpins but I was really pleased to be feeling much more confident going down the mountain, better than wanting to be hanging on the brakes all the time. This trip is really good for gaining confidence and each week it was great to see everyone gain in confidence with every ride but also get good tips and advice from Dean too. 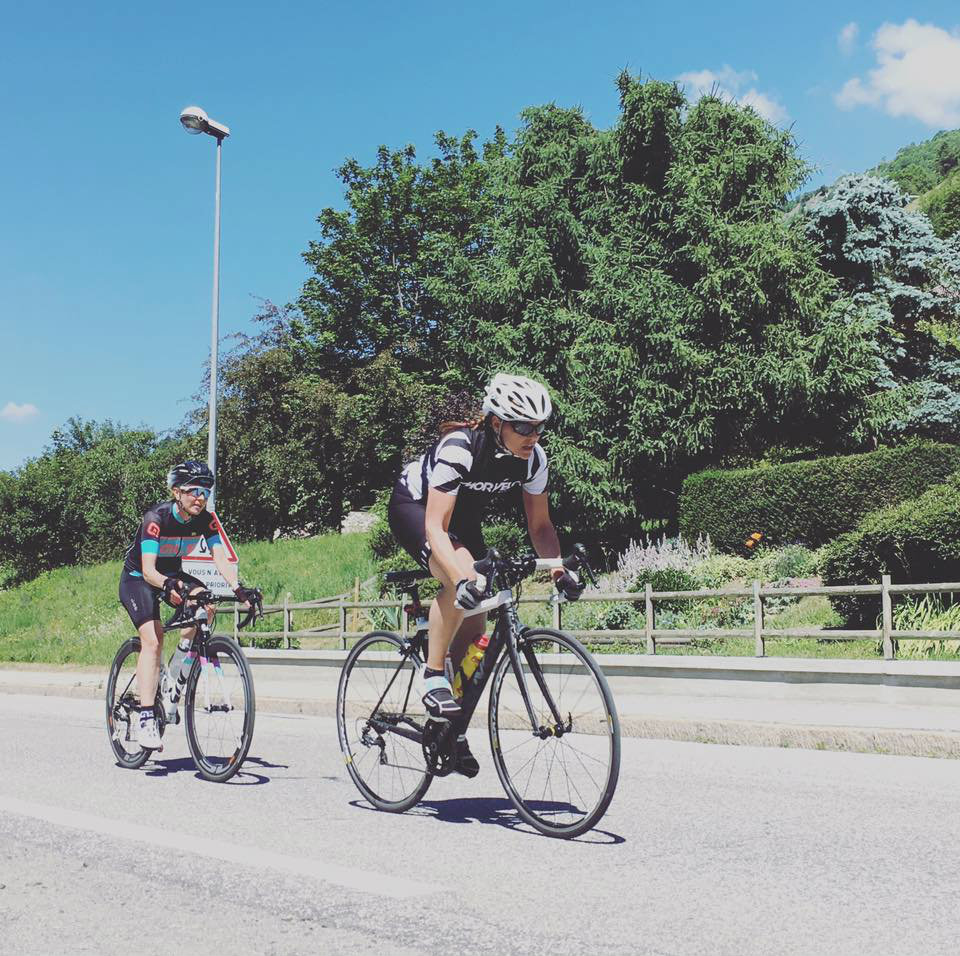 The plan for this day was to ride an individual 10TT and then a 2up 10TT. It was really hot, in hindsight I don’t think I had drank enough after the previous days riding and was feeling pretty ropey with a combination of hay fever and I think the altitude was getting to me also. I rode the individual TT and actually got into it, but then wilted very quickly after and was feeling sick and just generally dodgy! I did start the 2up TT but then had to leave the Beeston cc’s secretary, Richard to it. He did just fine without me anyway! I watched from the roadside feeling sorry for myself.  The triathletes then went for a swim enjoying the beautiful lake in Bozel, some running too. Luckily I had the best room mate you could ask for with a drug cabinet for every eventuality – thanks Laura! Also our lovely support team members Jenny and Reg for making sure i was alright too. Really do feel so well supported on these trips! 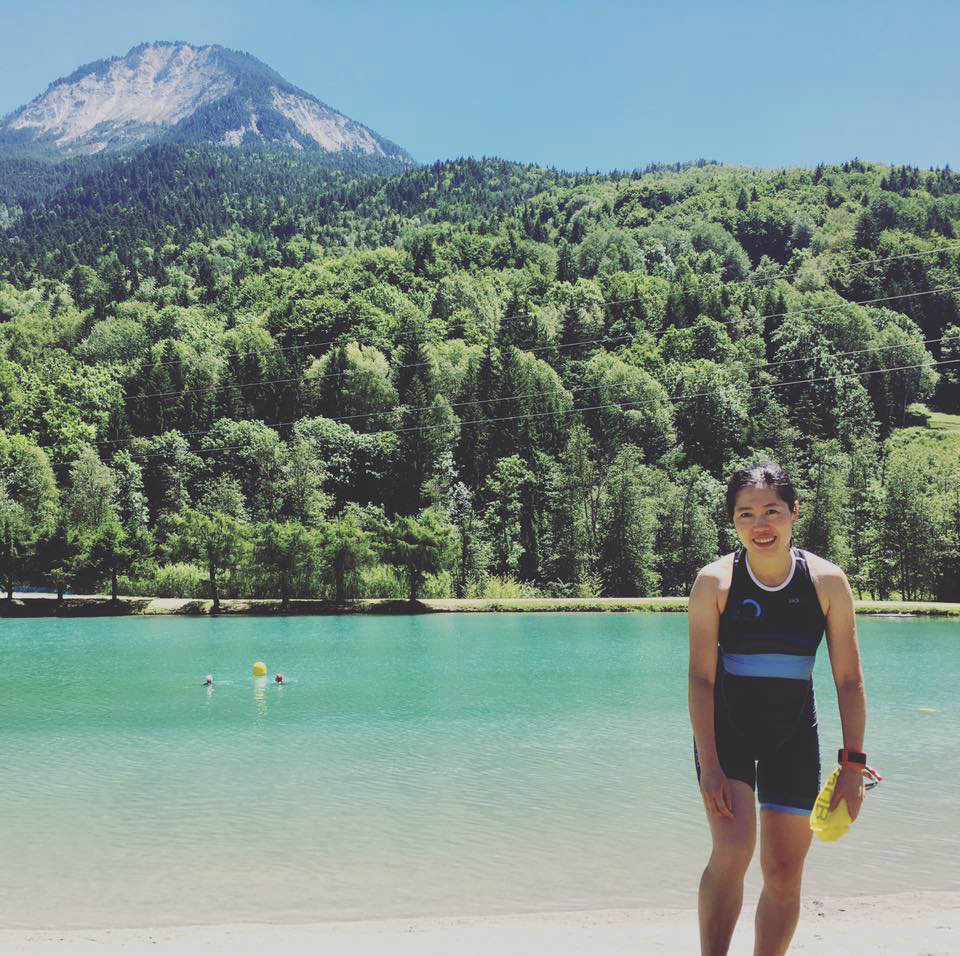 For the last day we rode to Albertville to watch the start of one of the Dauphine stages. Lovely ride there and back, I had managed to sort myself out from the previous day.

The week came to an end with a crash, quite literally. I had ridden over 250 miles up and down mountains and then managed to crash in the car park at the very end of the ride! Stupidity!!

Another Week to Remember…. 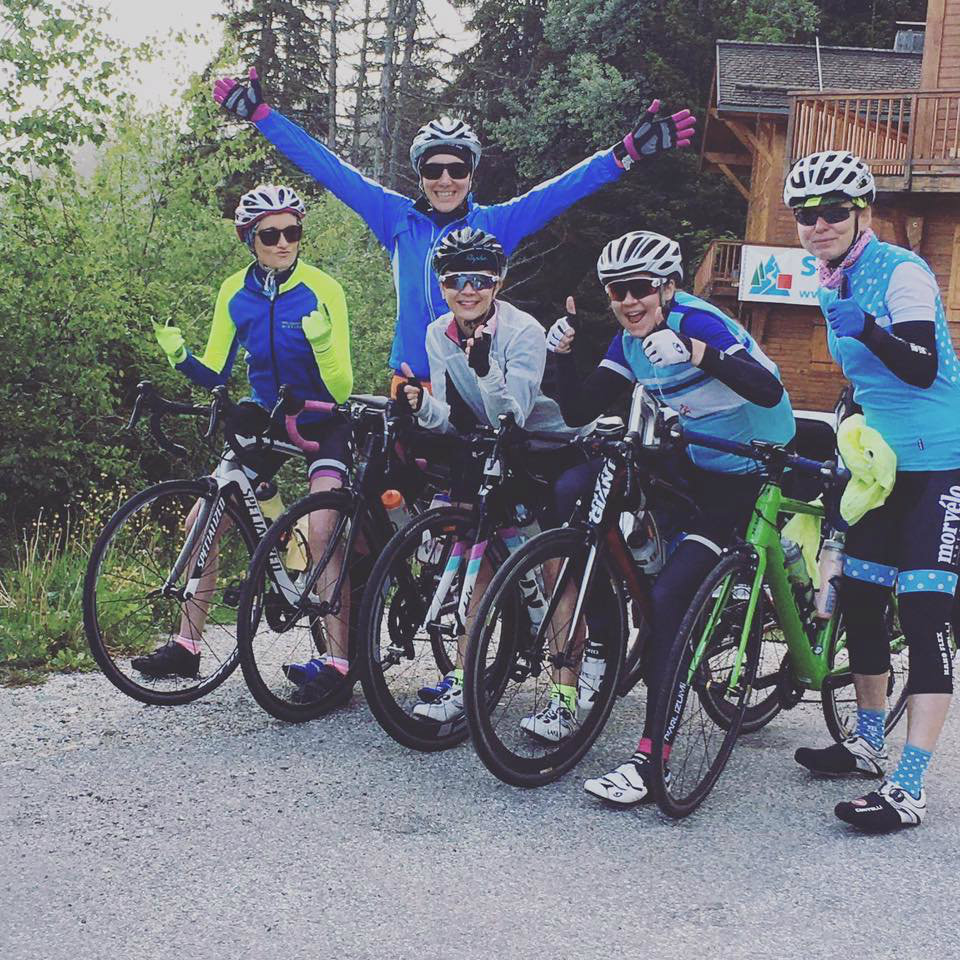 So I came away from another brilliant week with many good memories, feeling I had made many good friends and allowing me to spend time with those from previous years too. Not least to get in some good training and seeing the achievements from the team on this camp since returning has been great too. I always leave these trips feeling motivated and with plans of what I can do to train better. Next years aim – La Marmotte, definitely one to target!