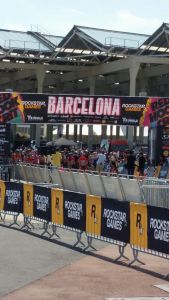 Earlier this year I was in Spain for a week of road cycling in Girona, followed by a few days of just being a tourist in Barcelona. Whilst in Barcelona I just so happened to be there at the time of the Red Hook Crit series race.

The Red Hook Crit is a series of four bike races which take place in Brooklyn, London, Milan and of course Barcelona. It’s a criterium race, but it is on fixed wheel bikes with no brakes. I had spent the last few days riding around Barcelona and along the coast on a city bike with a basket and then when turning up to the Barcelona Crit I didn’t quite know where to look. So many really cool and unique looking bikes. The event drew in so many ‘fixie’ fans, I felt like I had found the cool kids of cycling! Anyway I left the event feeling I needed to add a fixed wheel bike to my collection, not that any temptation is needed really. N+1!?

The organisers of the series describe the events as the ‘world premier track bike crit’, and I was really excited to watch the women’s race. However it isn’t for the feint hearted, im not sure I would have the guts to be able to take part myself. Riding in a pack takes good bike handling skills and confidence anyway, and so riding a fixed wheel adds an additional element. That alongside riding tight tracks is one of the things that made it so exciting to watch. I also always prefer watching women’s cycling events to the men’s. I get into it a lot more and also it’s something to aspire to, you can identify with the riders. 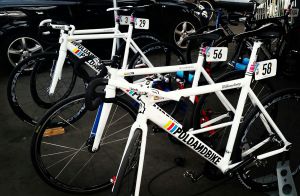 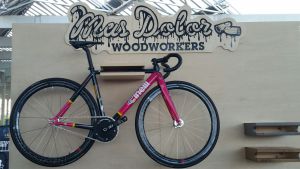 The line up featured riders from around the world. I was keen to find those who were from the UK which led me to find Velociposse, who are an all women team of track cyclists based in London. I managed to track down the two riders, Lina and Marigold who tell me more… 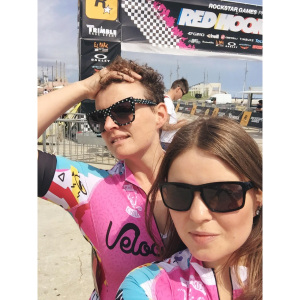 How long have you been racing fixed wheel bikes for?

Socially for around 4 years but have only started competing in the last few months.

What bike do you ride?

I have 3 brakeless fixed. Ones an old sticker beater for ripping round the East End. My purple princess, an Empella which is vintage steel lo pro and my track bike is a Dolan which I race on

What do you enjoy the most about being part of Velociposse?

Velociposse is an all female team (and the first of its kind!), what do you think has made it so successful?

Who doesn’t want an excuse to wear top to toe pink lycra?!

How was the course for you in Barcelona?

Were you pleased with how you did?

To a degree yes, I had a group of girls who I rode in a group with and they made it fun. You always have nagging doubts about things but wanting to do better is part of competition

How has the racing gone for you throughout the whole Red Hook Crit series?

I’ve only done 2 so I am improving quickly… but I’m looking forward to doing a full season next year.

And then so what’s next?!

Next is healing my fractured pelvis after an accident on Lee Valley Velodrome, then the Full Gas Winter Season before potentially thinking about RNC Brooklyn…. 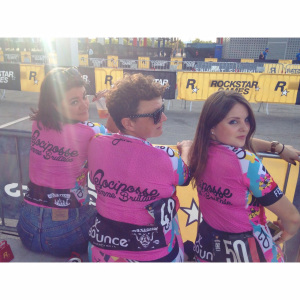 How long have you been racing fixed wheel bikes for?

My first race ever was Red Hook Crit London back in July, so literally just a couple of months.

How did you get into it?

I have started coming to the velodrome a lot more recently to get accredited and so have been training around Regents Park with my other bike family called ‘East London Fixed’ for over a year now, so it was the time to try out something a little bit more exciting and see how I do in racing.

What do you enjoy the most about being part of Velociposse?

Being able to eat all the cake without any judgement!

Definitely the support and encouragement from the other team members. It makes a massive difference being a part of an all women crew and also being able to fill places at women’s races that organizers kindly put up for us.

Velociposse is an all female team (and the first of its kind!), what do you think has made it so successful?

The attention we got as a team is really incredible and we couldn’t have asked for more. The fact that such thing did not exist beforehand is a little strange, but I guess now is the right time for us to make a difference in women’s track cycling. I think the fact that we have a bunch of awesome women riding all types of bikes, from our main discipline – track to BMX, Cyclocross and road bikes makes it even more badass.

How was the course for you in Barcelona?

I personally liked it better than the London one as it was a little bit wider with mostly smooth surface, a few exciting tight corners and a hairpin turn thrown into it. It was fast as hell and dangerous enough – there were 2 bigger crashes even in the women’s race.

Were you pleased with how you did?

I came 24th out of 44 girls, so not bad for a 2nd fixed gear crit. I felt like I could have done better (as you always do) and pushed harder around the corners – there was enough opportunity to overtake riders, but my risk averse brain told me to ride safe and finish the race. I’ve seen too many crashes lately and didn’t fancy being out of training for a longer period of time and just wanted to enjoy the race, which I totally did. I loved every second of it!

I don’t even think I have one! I love both of the bikes I ride and wouldn’t change a thing. Although I would be keen to build a frame from scratch, something that I could design with the help of the frame builders and have some input on the geometry.

Wishing a very big get well soon to Marigold 🙂

For more information on Velociposse you can visit their website.